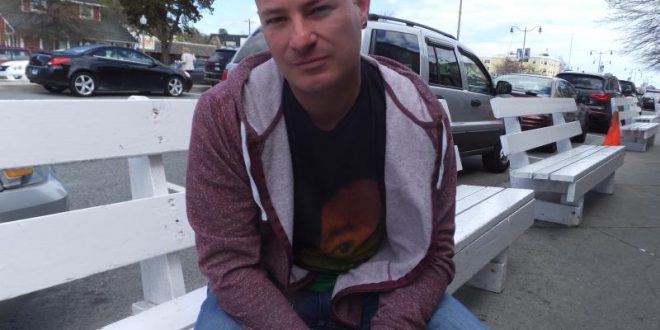 Welcome Ryan! Let’s jump right in! We heard you have new music coming soon with Little King. You have been putting out music as a band since 1996 right? Would you consider this a revival? What made the band want to release new music?

Greetings and Hallucinations…thanks for the chat!

I have been releasing music under the name “Little King” (which is the Gaelic translation of the name “Ryan”) since 1997. I released an album that no one gets to hear called Transmountain that year. It was, um, cute?

As to why the new record, I can’t help myself!  Life intrudes, always, but I have so many things I feel and want to share musically and lyrically.  It’s a compulsion, if you will.  I’m also arrogant enough to believe that people may actually benefit from hearing some of it!  But given the current political climate, the perpetual state of disrepair in my love life, the odd landing spot I have found myself in (Sussex County, Delaware…yup…look it up), and the abject lack of deeper thought and introspection in the modern world compelled me to make another album.  And we had a BLAST recording it.

How will this album differ from previous music released?

For starters, my good friend Manny Tejeda makes his Little King debut on the bass, and that’s been a wild ride. Manny is a TRIP…my Dominican homie. We’ve been friends only a few years, but he’s a brother for life. He brings a different rhythmic and melodic sensibility to our music that I’ve never had before, and you can hear it throughout the record.  When he came to Texas (we always record in El Paso, my adopted hometown), he literally nailed his parts in just a couple hours. Then it was off the the Cantina!

Occam’s Foil is dynamic, like the other LK records, but I think the playing and writing are at an all-time high. This album was meticulously crafted, EXCEPT the guitar solos.  I like to script everything out except the shred…all solos are literally improvised on the spot!  These were cut in one or two takes, and I think that lent a bit of spontaneity to the album, particularly on “The Skin That I’m In” and “Hate Counter.” I am very proud of both of those songs and guitar solos.

We also featured a violin and cello on a couple tracks, and those pieces really shine!  I had my colleague David Hamilton write a couple arrangements for brief interludes on “Skin” and “The Foil” and the results are SMASHING.  Particularly on “Skin”…I am so moved by that song.  That arrangement achieves a rare balance of form and function, to me.  It SOUNDS great, but is also concisely conveys the message of the lyrics perfectly. I still laugh/cry when I hear it, and I can’t wait to be a total mess when we play it live.

Did you write or have a hand in writing the new material?

I wrote it all – lyrics and music – with an assist from Manny and Eddy (Garcia, the drummer for the last 3 LK records as well as our engineer).  Basically, I went into the woodshed and wrote the parts, fit them together, and then would present them to Manny.  We would then jam on them together and make edits like tempo, reducing a passage from 8 bars to 4, and more.  Manny is a great sounding board for that stuff, because he comes from such a diverse musical background.

Once the songs were written musically, then we tripped to Texas to record with Eddy.  Eddy is a MONSTER drummer – the best I’ve ever played with and one of the best in the world, in my opinion – and he also brings a different tenor to Little King’s music. He is an excellent musician, has great ears, and is a writer for his band Pissing Razors.  So the combo of Manny and Eddy take my songs from here to HERE!

After the music was finished, or at least the basic drums/bass/guitar tracks, I went home and wrote the words. We saw a lot of horror in my hometown of El Paso with the migrant camps on the border and of course the horrific shooting at Walmart in July of 2019. That immediately inspired me to write “Hate Counter,” and the rest of the lyrics came out like a flood. It was definitely an emotional process, and one that took its toll on me.  I cannot abide by just “mailing it in” lyrically!  These are my legacy, the words that my grandchildren and beyond will know me by, and I wanted to make sure that they conveyed specific messages while still being poetically pleasing.

Will you share with us what your song writing process is like? Do you sit down and it just comes do you or do you draw inspiration and write songs a little at a time?

Absolutely!  As I described above, I have to write the music first.  As a guitar player and the lead singer in a 3-piece band, I have to make sure that my fairly complex guitar lines can lend themselves to singing. That’s not easy when the tunes aren’t all in the same key, tempo, and time signatures. And true to form, Little King songs are NOT like that. How boring would that be?

Once I am satisfied with the music, I move to the lyrics. Of course, I am inspired by current events (I consume news and info in heaping quantities), but I am equally inspired by my day-to-day life. Parenthood as a single dad, watching the opioid crisis devastate the local community here in Delaware, and the pain of confronting my role in 2 failed marriages…that’s a lot of fodder for lyrics.

I often ask myself just How Much personal stuff I wanna share.  Do I discuss those failed relationships with the public at large? Do I let strangers into some of my struggles with alcohol, anger, and anxiety? How much is too much?  But at the end, I own 100% of who I am, scars included. If the purpose of music is to inspire, then I suppose I have to tap into all of me to reach all of you…

Do you ever experience writer’s block, if so how do you combat that?

There are two kinds of writers: Those who experience Writer’s Block, and Liars!  I am a trained writer, as I have a BA in Creative Writing from the University of Texas El Paso and I actually taught English for a couple years in High School. So, one would think I have some simple techniques for conquering that block. And I do! But they’re not always effective.

Nature and silence are helpful, as are conversations with my diverse and bright friends and family. A walk through Manhattan never fails, either. I read a lot, too, and books are always a good source of lyrical inspiration.  I just have to be careful not to be too derivative.

As for the music, I woodshed.  I have developed all of my songs through one sort of guitar exercise or another.  A great example of this is on a song called “Legacy” from Legacy of Fools.  I was simply working on an alternate picking method through a simple open A chord ( strings 4-2-3-1) in an odd time, and it became one of the favorite little riffs I’ve ever written. Make no mistake…there is NO substitute for practice and hard work.

If you had to pick and I know it will be tough, what is your favorite song you have released to date?

Such an evil question!  They’re all my babies.

I am particularly attached to “The Skin That I’m In” from the new record. It has everything…emotional lyrics, a cool arrangement, some of my best vocals, a transcendent string arrangement, and perhaps my best recorded guitar solo.

Close second and third would probably be “Happy Home” from OD1 and “Collateral Damage” from Legacy of Fools.

Listen instead of hear. Think instead of react. Slow down instead of speeding up. Find your groove instead of following the path others lay for you. Believe in your inherent value as a human and realize that we are all connected. You are not alone, and someone loves you. Create beauty and awareness and share it with the world.

And by all means, treat strangers with kindness. You can’t imagine what they’ve been through today, and you can’t imagine how much difference a smile and a kind compliment might make in someone’s day. And then they open a door, and the person they opened a door for does the same…over and over…it’s a Domino effect and it’s REAL.

Now tell us where we can catch all of your new music and where fans can connect with you!

Everything can be found on our web site at www.littlekingtunes.com.  Streaming songs from YouTube for the last 5 albums, a comprehensive bio, video interviews, a press archive, and more.  Also, we are pretty active on FB and IG @littlekingtunes.  Of course, you can download and stream our music everywhere on Apple Music/iTunes, Pandora, Spotify, and all the other usual suspects.