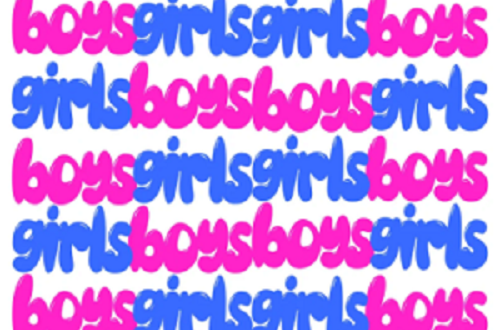 Buried in the adrenaline of a percussive element distant in the mix but big enough to crush anything in its path, Michael Ghould’s vocal is initially out of reach in his new single, “Girls & Boys,” but not for long. As we continue onward in this take on the Blur song of the same name, his voice will find a way into the center spotlight between the crash of the drums and synth-induced friction in the mix that could start a small fire in your speakers if played too loudly. This is sonic warfare, but he came armed with the proper weapons to emerge victoriously.

The bassline is a little subtle for how enormous a song this is even when played at a relatively reasonable volume, and though it’s obviously present in the arrangement, it’s constructed as to be a minor role-player as opposed to a centerpiece (as so many other acts would have done with this composition). I get the idea that Ghould isn’t interested in the excesses of his peers as much as he is the sort he wants to utilize exclusively to highlight his vocal skillset, and if his contemporaries would follow suit I think the indie pop genre would be better off for it.

As far as the synthesizer is concerned, nothing is more important to the harmony in this single than what it contributes. Ghould is actually styling his vocal around its melodic bend, and while his singing is reason enough to take a look at his work, there’s a lot more to be said about his command over the instrumental fabric in a cover like this one. It feels like it’s his own composition, which is hard to pull off in anything as familiar to the audience as this song is to most alternative fans.

Michael Ghould’s “Girls & Boys” is a little more rhythmically rigid than the original was, but I think this was important in order to give his vocal the stability it needs to really colorize the verses here. He’s breathing life and soul into the words as though they’re his own, and in doing so the vitality of his delivery takes on a greater meaning in the mix than his actual tonality does. Both in cadence and poeticisms, this single is a quantified hit that serves its composers as well as the man covering it today marvelously well.

I don’t normally go for cover songs, especially from indie artists who are still trying to find their way into the hierarchy of the international underground, but in the case of Michael Ghould’s “Girls & Boys” the music and the musician making it happen are just too good for me to resist. Ghould’s approach is well-timed while his demeanor is personable, making this performance feel real and tangible as opposed to removed and icy (as much of the self-branded quarantine pop movement has fallen victim to). He’ll be on my radar as 2021 gets started, and you’d be wise to have him on yours as well.