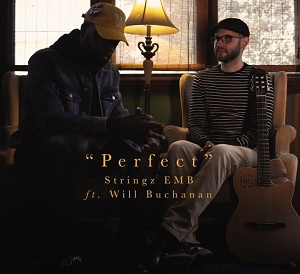 For his latest release, a track and music video titled “Perfect,” Stringz EMB is getting as brooding as he ever has on lead vocals and constructing a harmony that could serve as a real point of interest among mainstream fans. As opposed to taking a conventional approach to lyricism, he lets the elegance of his execution take care of the context and the substance of the groove handle the definition, making this track a physical wonder as well as an aural treat. There’s no hesitation here, nor is there a sense that we’re listening to anything recycled – the emotion is raw, as is the desire to be heard.

The chorus cuts through the instrumentation beautifully and lines up the perfect ascending climax for the lead vocal, and if you told me that this portion of the track was initially improvised I would probably believe you. There’s such a fluidity to Stringz EMB’s performance that it’s easy to see where a lot of his songwriting is probably coming out of extended jam sessions with a beat or even just a simple hook. You can’t rehearse this kind of dedication into existence; it’s something you’ve either got as an attribute or wish you could someday acquire.

Despite the introspective stylization of the lyrics, there’s really nothing self-righteous about the narrative as it’s presented to us by Stringz EMB. “Perfect” touches on self-awareness more than it does any other songwriting theme, and if we isolate the poetic value of the words from the format in which they’re offered to the audience here, there’s an argument to be made that they’d be just as personal in tone. It’s the harmony that makes them relatable on a grander scale and furthermore makes the entire track an accessible pop single on all counts.

Though the groove is a bold component of the excitement to be found in “Perfect,” it didn’t require an enormous bassline to draw together the physicality on the bottom-half of the single (thus, we find no such element here). It’s nice that Stringz EMB is actually taking the time to think out some of the more minute intricacies in his songcraft in an era that has increasingly favored streamlined composing; not because it makes him a rebel, but because it sets his music apart from the other content coming out of the underground in 2020.

Listeners who are into progressive R&B that wasn’t designed to fit inside of some commercial box should consider Stringz EMB’s “Perfect” the pinnacle this season, and I don’t believe it’s going to be the last track of note that this aspiring star drops on us in his career. He’s just now starting to evolve into his own brand of songwriter and performer, and with a little more time and an LP to really stretch his creative legs and flex some melodic muscle, I think he’s going to attract a lot more buzz on the FM dial than a lot of his fellow players on the indie side of the industry will in 2021.