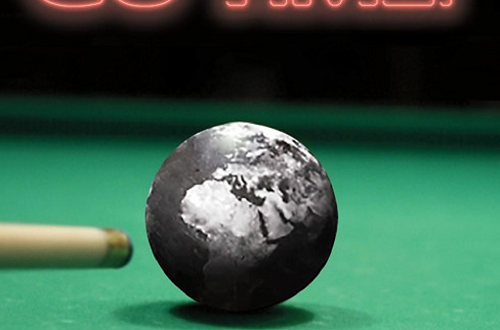 In the track “All or Nothing” on Go Time!’s latest release the magnetic and manic Eight Ball, there’s a line “I always take it too far, never see it coming, leaving me reaching for all or nothing” and I’d argue more than the albums titular song, this is the best way to describe what the band is, and what it stands for, and I mean that in the best way possible. leader Scott Niekelski with Mark Marketti, Paul Schmidt, and Steve Grzenia has taken the concept of a rock album to the extreme, truly “taking it too far” while never buckling under the weight of their strength, and trust me, you’ll never see the depths this album has to plum coming. It’s funny for an album that mentions a lack of clarity like in the harmonious “Closer I Get” and in “All or Nothing” “trying to make sense” the clarity on this album comes in sonic spades.

Schmidt’s guitar work is unparalleled across all 20 tracks, yes you read that right. 20. Tracks. And it’s every bit as engaging as it implies and with numerous solos and plucks both electric and acoustic Schmidt provides acts as the perfect co-pilot to the confusion and sometimes violent anger Niekelski has lyrically, never veering off into metal territory but it’s like the twice-removed cousin of what could be described as “punk rock – lite”.

It’s ambitious work that threatens to topple because of the number of elements at play.  At almost an hour sometimes it can feel like the songs are blurring together, but almost like that of psychedelia where you don’t know where one song ends and the other begins, luckily broken up by the stirring quotable choruses of each song, like the opener “Fairy Tale Scenario” to its triumphant closer that affirms Go Time! will not quietly go into the night with the kicking and screaming “Quiet Allegation.” There are reoccurring motifs and fun dips and payoffs always with an inviting sense of escalation, even when the vocals stay relatively monotone, but in a way that works given the sheer broadness of the band’s scope. I know this is one of those phrases in music that’s done to death, but they don’t make them like this anymore.

Go Time! is on the front line defense of preserving the old rock sound with its gracefully tickled keys, a bass that’ll leave a ringing in your ears, and some incredible drum work surely to impress any rock purist. There’s an old adage that no good album is too long, and no bad album is short enough, and despite its length, Go Time! has done something incredible by making an epic on par with the likes of Pink Floyd or Lou Reed with sounds in places not too dissimilar. In a lot of ways, it feels like the kind of album you dusted off from your father’s record collection before he looked at you and said “you’re not ready for this”. Go Time! is here, loud and clear.