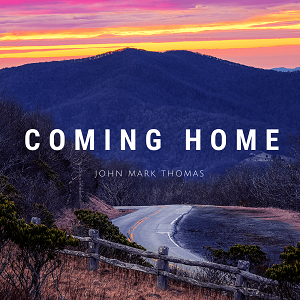 Sometimes, a simple slew of guitar strings summarizes the tone of an entire composition long before lyrics ever enter the picture, and though it can certainly be said that there’s more to Coming Home’s title track than its guitar part, this doesn’t make its intro any less spellbinding. In this first of five included songs on John Mark Thomas’ new EP, the fragility of the lyrical content is balanced by a muscularity to the acoustic guitar’s patterned rhythm as opposed to the other way around, as if to suggest a brokenness within our singer that can only be mended through some devoted sessions spent with his six-string. It’s intimate and beautiful on so many levels for me as a critic, but as a fan of good music in general, it’s the right way to kick off any record, whether it be an extended play, album or anything in between.

The namesake song in Coming Home is followed by an angsty “Can’t Give Up,” which hesitantly stomps into focus only to create one of the most endearing swing-fests in the tracklist. This tune isn’t quite the spunky piece of optimism “That Spark Will Never Die” is, but I like that Thomas stacked them together in this tracklist almost as a way of highlighting the anti-rigidity of his aesthetic. He has no problem being loose and following no other framework other than his own creative wit in this EP, and for a songwriter who has been around for a while now, he sounds as fresh and unjaded by every aspect of the recording process as a newcomer to the industry would.

“Give You the Stars” keeps the nimble feel of “That Spark Will Never Die” going strong, with its moderate percussive component taking on more of a starring role as we push through the track. Thomas is so completely at ease with his surroundings, basking in the color of his craft and coupling every beat with something a little personal within the very tone of his execution, and even though I have a feeling that most if not all of this material would sound even better live, he isn’t holding back from giving us a stage-caliber performance in the studio here. It can be hard to conjure up the same kind of emotion we’d get in a concert, but I think he does a good job of getting us pretty close to the real thing in this single-worthy song.

Coming Home concludes with the crusher of a ballad “Sing (Mom’s Song),” alluding to a more sensitive John Mark Thomas that could easily outgrow the limited resources of his underground scene a lot sooner than later. He doesn’t translate as someone comfortable sitting in the background here at all; if I’m being totally honest, I think the angst-ridden undertow in “Can’t Give Up” is all the evidence we need to confirm that Thomas’ ambitions are going to carry him a little further from home than this record’s title would imply he’s interested in traveling. I can’t wait to witness the adventure unfold for myself, and if I’m right on his potential, Coming Home is only the first few steps.