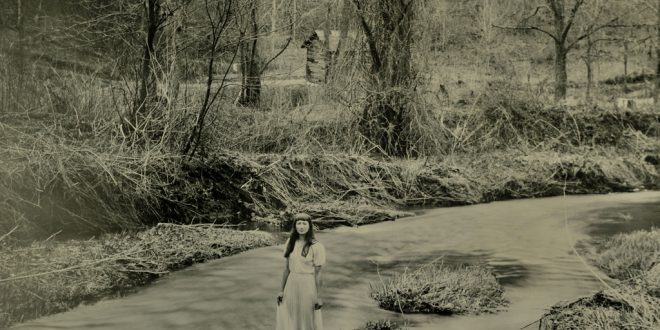 Gold Light and Snakemusk’s “Shadows In The Shallows” (LP)

A rustic harmonica and its complementary guitar melody are waiting to greet us at the onset of “The Heart is a Lonely Hunter,” the opening salvo that starts us off in Gold Light and Snakemusk’s Shadows In The Shallows, which is due to be released this coming May 10th and has already attracted a lot of attention from critics and fans of the two indie musicians alike. The pastoral poetry occupying the center of the heavenly harmonies induces chills upon contact, and as the airy rhythm carries us into the galloping “The Last Picture Show,” it becomes quite evident that Gold Light and Snakemusk are doing a lot more in their debut album together than merely blending the bucolic with the bold.

“Nobody’s Best” slows down the feverish tempo that serves as the bread and butter for “The Last Picture Show,” but it doesn’t sacrifice any of the mystically melodic tonality that we got rolling with for its quaint harmonies. “Papa Knows Best” brings a pristine piano into the mix and a hollow percussive rhythm that challenges the strings for dominance in the two free-spirited minutes that the song lasts. It sets us up for the Side 1-finishing “Being Sweet” perfectly, as the elegant play of this track evens out the rigidity that we’re introduced to by its predecessor. There’s a lot of twists and turns to this tracklist, but there’s scarcely a moment where it feels like these two are stretching their songcraft a little too thin for mass-consumption.

Side 2 of Shadows In The Shallows kicks off with the country swinging “One Thing After Another,” but the personality of this record’s second half isn’t as much a tribute to old fashioned Nashville melodies as it is a redressing of vintage Americana. “Heart of Black” personifies the collaborative spirit brought to life by Gold Light and Snakemusk in this album, and next to the elegiac stomp of “Release,” stands as one of the only effervescently-stylized ballads that we’ll hear in the latter portion of the LP. “Release” delivers some crushing lyrical blows, and though it took me a few listens to fully understand its deeper meaning, it actually turned out to be one of my very favorite songs in the entirety of Shadows In The Shallows.

“Death” brings us to the finish line with a turn of the century-style bluesiness that, in some ways, brings us full circle to where we began with “The Heart is a Lonely Hunter,” though it avoids recycling the rustic tones that made the opening track the hypnotic spring jam that it truly is. Try as you might, I doubt that you’re going to find another album quite like Shadows In The Shallows this season, and while I wouldn’t say that Gold Light and Snakemusk are redefining the narrative with this record, they’re certainly adding their own unique texture to modern Americana, and leaving critics like myself quite excited about potential future projects between the two of them. Together, they prove in this LP that it doesn’t take much more than a couple of smoky string arrangements and homespun harmonies to hit a homerun in the studio, and to me, that alone is something worth celebrating.

User Rating: Be the first one !
Share
Previous Kingdom of Birds release Glitz (EP)
Next A Picture Made – Heal (LP)