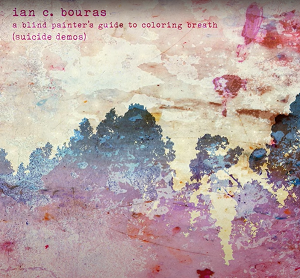 “A Fleeting Life in a Square” kicks off Ian Bouras’ A Blind Painter’s Guide to Coloring Breath. The eight song collection benefits from superb production despite his independent status and its success is even more notable thanks to the conditions under which he wrote the tracks and the fact they are in demo rather than finished form. I’m entranced with the guitar sound he achieves on this release; this is my first exposure to Bouras’ music and his method of building instrumental arrangements using looping effects. It takes some getting used to, but rewards listeners for their patience and willingness to stick with it. I cannot say if using looping effects is an outgrowth of Bouras’ battle with the neurological ailment Ataxia or an artistic affectation. It, nevertheless, sets him apart from other guitarists and composers.

He bears no similarity to anyone I can recall. It is rare, with the guitar, to encounter players without obvious stylistic antecedent. “A Fleeting Life in a Square” sounds like no one else with its near ambient flow and how his touch on the strings skirts the ethereal. These are thoughtful arrangements, built with a wandering creative spirit, and the album’s second cut “An Evening at the Villa” underlines this quality. I like how his music touches on cinematic qualities without ever overstating them and he does a fantastic job redirecting his interior life into the strings.

The looping technique is especially effective during the song “Perspectives”. It highlights the slightly skewed character underpinning the track; it is obvious Bouras is reaching for something a little different here than elsewhere. A word about the album’s production – despite being demo recordings and DIY through and through, Bouras has succeeded producing a first rate sonic product rather than a shoddily sounding indie affair. “Perspectives” is a prime example of that.

“Solace in the Shade of the Universe” is a much more traditional Bouras track. It has the same willingness to explore and push limits, but there’s little of the outright boundary pushing heard during the preceding “Perspectives”. “The Darkness that Clothed an Angel” is one of the album’s longer tracks and his guitar work sparkles throughout the song’s entirety. Bouras’ talent is considerable enough his instrumentals are able to retain the attention of interested listeners from beginning to end and this is his strongest piece in terms of dynamics.

He closes A Blind Painter’s Guide to Coloring Breath with the song “Weeks Become Months, and Memories Become Melodies”. The title is slightly reminiscent of a classic country song in the best possible way. This certainly isn’t a country classic by any stretch of the imagination but rather a worth challenger to the “The Darkness that Clothed an Angel” as my favorite moment on the release. Ian Bouras answers life’s challenges each day and I find his continued creativity life affirming in the face of frightening adversity. He’s an artist well worth seeking out if you value invigorating and deeply creative music. He refuses to be pigeonholed.