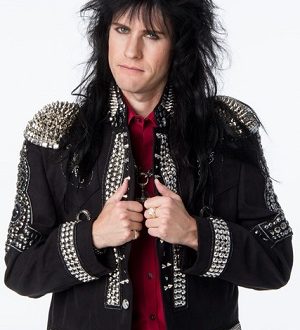 Rocky Kramer is a Norwegian artist relocated to California with a love for the energy of seventies and eighties hard rock, as seen on his record “Firestorm.” I sat down to talk with him about his musical inspirations.

One of my questions is about Scandinavia generally, or more specifically Denmark. I was talking to a bassist who played at Roskilde Fest over there, and he said that on a bill that had Bob Dylan, the wildest audience reaction of the whole thing was when there was a death metal group with weird costumes and a humongous stage with flames…forgot their name. I bring up because it seems to be that American heavy metal is taken super seriously across Scandinavia, including Norway. Do you have any idea why that is.

That’s a good question. For some reason, Norway first ado

pted black metal; they loved the very extreme of black metal, some it I guess worshipping Satan and those things…I was never big into that, but I guess that Norwegians are open to music that is very heavy, and really all Scandinavia as well. A lot of Swedish bands have great success internationally, and their music can be very heavy at times. But Norwegian black metal had a very garage type of quality, where things are not recorded very well, and I don’t know quite why that is. Norwegians, they love heavy metal, and I’d love to know what band that was. But the big metal bands from the US have always been well-received; Metallica played in my hometown of Trondheim a few years ago—I wasn’t there because I was here. We’re talking like, a town of 200,000, and I think they played for 30,000 or 40,000, so almost like the whole city went! It’s crazy when you think of the amount of people in the city and the percentage of them that went. Normally, if Metallica played in LA, sure, they could play for 50,000 or 100,000…I actually saw Metallica in Seattle, and they played for around 90,000 people, but in Seattle there’s millions so those numbers make sense. I think a lot of people [in Trondheim] went that weren’t necessarily big Metallica fans, they just want to see metal. Maybe it’s just a fascination with it.

So it sounds like you’re saying Norwegian metal has maybe a less slick sound than some of its neighbors like Sweden?

Mmm-hmm. I had some friends who were really into black metal, and had a few different black metal bands. They were talking about how a lot of the big black metal bands were recording. It’s like, if you’re Def Leppard or Metallica, you go into this really fancy studio and spend like a year in it to make this really great, polished record. But the black metal guys, they’re like, “I found this cassette player from 1982, I’ll record the whole album on the cassette, and we’ll do one take—that’s like, that’s our sound, maaaan!” [laughs] Don’t know why that is. I’ve always come from the philosophy that you want to present yourself well, you want to create the best product possible. Obviously when you’re starting out you don’t have the budget and resources that you need to do that, you’re probably starting out at home recording stuff…but at some point you want to improve on that, but I guess that’s not their mentality. They wanna keep it edgy and dirty…they don’t want it to be perfect!

Like the people who say that vinyl has more soul than digital, but with crappy tape recorders.

Right, yeah. Vinyl is very popular now, and people don’t really buy CDs  anymore, but they do buy vinyl. A CD is essentially a perfect copy, other than the fact you have to have a physical CD unlike streaming. With vinyl, you have to be very careful with the vinyl, you have to have a player that could damage your record and do all kinds of things. It doesn’t sound perfect, but it has a warmth and sound that you don’t get from digital, which is very accurate. And sometimes what is most accurate is not the best thing, you wanna do something with it or dirty it up. And that’s why a lotta vocals are distorted, it’s not because they forgot to turn something down, they’re doing it intentionally and recording very hot because they want that sound, it adds saturation to it that makes it kinda…I don’t know. I dunno what the appeal is, but we’re so used to hearing bands distorted vocals and we like it, it works.

It’s too bad the days of browsing physical albums at like Tower Records are gone.

Yeah, everything’s gone! [laughs] All the physical stuff. You can buy it online, and digital is very convenient, but…I guess I miss the fact that when you got a CD, you got a booklet, you had something physical you could touch, there were pictures of the band and lyrics, you could learn who produced it, who engineered, who recorded it. A lotta information on CD you’d never get when you’re on Spotify or any of those things, you don’t know who made it anymore. So people just listen to a playlist in a song and then move on, they don’t really learn anything.

Now I don’t know Norwegian metal at all, but some of my favorite electronic pop bands come from there—like a-ha and Röyksopp, whose name I know I’m getting wrong. Very interesting place for music. When you were growing up there in the nineties, did you have some local artists who really inspired you?

Yeah. I’d say one of those big moments for me, discovering what I wanted to do with my life, was…well, to me I consider them a local band, but they did have success internationally. They’re a band called TNT, and they started out in the eighties, started out singing in Norwegian but had enough success that they were encouraged to start singing in English, so they actually got an American lead singer, Tony Harnell, who’s from New York—a great voice, very unique voice. Trondheim, where I’m from, had a millennium anniversary. It was a thousand-year anniversary…thousandth? I’m not sure how to say it. Anyway, the city was founded in 997, so this was New Year’s Eve 1997, and they did a concert event for Trondheim. So they had TNT perform, and my father, he first played violin in the Trondheim Symphony Orchestra, and the Orchestra was essentially putting it together. And they were the main back-up band, whatever you wanna call it…don’t wanna call a symphonic orchestra a backing band, feel like that’s an insult! TNT was one of the artists, and they didn’t actually play with them in that event, but I was there because as my dad was in the orchestra, he took me to a dress rehearsal a few days before. That was my first real rock experience, seeing TNT in a basically empty concert hall play one of their new songs to a playback. It was just amazing to me because I’d never seen the smoke on the stage and the lights, and they were just out there rocking out. It was such an amazing thing, I was right upfront looking at them, going “Oh my God, those are real rock stars up there!” That was a big inspirational moment for me, I had never really experienced that apart from on TV. Seeing that in person right in front of them was incredible. That was the big one, there are a lot of bands in Norway that are definitely great and worth listening to. You did mention a-ha, I think they’re definitely the biggest, everybody knows “Take On Me”. It’s funny, because I hear “Take On Me” at restaurants so often. I’m always thinking, “huh, everybody knows this song?” I always felt like I grew up with that song because they’re Norwegian. In Norway, you’ll hear a lot about a-ha…I feel like they keep saying they’re retiring and come back, it’s like Rolling Stones, they’ve been doing a farewell tour for thirty years! That’s the way it is, and it’s fine. Unless you’re like, eighty years old, you don’t have to say you’re gonna retire. You’re just gonna say, “well this is our next tour, we’re gonna take a long break after this.” You’re allowed to say that, just don’t say, “It’s our LAST tour, we’re NEVER gonna be on stage again!” So, anyways. Yeah, a-ha is a great band. If you’re into progressive metal, there’s a band called Pagan’s Mind that’s pretty cool. They’re not that famous, they are very much like Dr  eam Theater, so anyone who likes Dream Theater will appreciate Pagan’s Mind. There’s a lot of bands that I don’t personally listen to but know they’re huge. Especially in metal, not just prog metal but other types. They’ve had a lotta success, and it think that’s great.

The official website for Rocky Kramer may be found at https://www.rockykramer.com