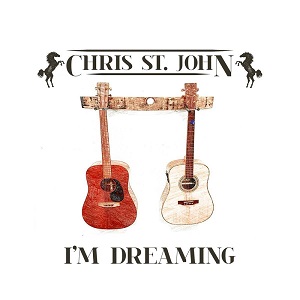 Long Island’s Chris St. John’s time as a lawyer and eventually a judge certainly served him well in observing and dealing with relationships and personalities of all types. I’m sure he’s seen his fair share of pain, suffering and crime. In his outstanding single “I’d Send You My Heart” from his debut collection, I’m Dreaming, St. John’s New York fast-paced, law practice takes a backseat for solid songwriting and a nod to a yesteryear’s slow-down and really listen to the words and music. He’s not a relic, but one to be relished.

“I’d Send You My Heart” plays out like a man giving his true feelings for a long lost friend, or putting it out into the universe knowing it will be unanswered. It turns out the song, according to St. John’s press release, came together from recollections of conversations and text messages with his uncle. After his uncle had passed away, the song really came into fruition. For a song about a deceased uncle, there is so much life in St. John’s vocal delivery. He’s almost coy, not quite child-like, but the respect of a man for his uncle. Maybe it’s like a father-son dynamic, you know, where anytime you’re around a relative you almost resort back to your reserved self. I like the persona St. John gives in his vocals, and the timbre in his voice is a perfect mahogany blend to the acoustic guitar. It’s like the sound a gorgeous amber gem would make.

The guitar, like waving prairie grass and a wholesome slice of apple pie, might sound aimless at first. It quickly gets on track, alongside St. John’s leading voice. I’d like to think that prairie, Americana-esque moment will stall inside your own soul for a while like it did mine. It felt bold, giving depth and layers to the song. It was unexpected and gave me some chills. I’m in awe of the guitar playing, especially with St. John’s prior life as a lawyer. It’s absolutely spellbinding in its arrangement and structure. It sounds simple at first, but really grows and evolves. I think he lets his guard down and shows us his artistic side and maybe more of a human side that the courtroom censored.

I could be completely off base on this assumption, but never in a million years did I think that the song I was listening to came from a lawyer. I must be too biased with the idea of a lawyer being the kind of guy you see on a billboard or cheesy commercial during daytime TV. Instead, I should have recalled the Atticus Finch character in To Kill A Mockingbird. Finch was a sensitive man, a good man who stood up for what’s right. A part of me heard Finch in the St. John “I’d Send You My Heart” song. Maybe I’m giving too much drama and romanticism to the thought. Still, I’d like to think that St. John has some of the same characteristics as Finch – judging by my experience listening to the great “I’d Send You My Heart” I think he does.

The music of Chris St. John has been heard all over the world in partnership with the radio plugging services offered by Musik and Film Radio Promotions Division.  Learn more https://musikandfilm.com