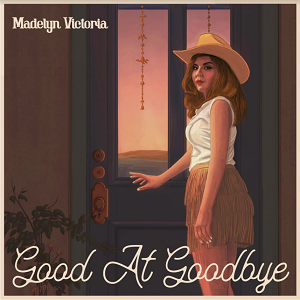 Love is a very complex and delicate subject to discuss in music because many times outside of professing how you feel about that special someone, breakup songs are often one-sided and usually very angry and it’s understandable why that could fill a void of catharsis for people, because who hasn’t been spurred and furious at someone who looked you in the eye and said: “I love you”? Country star Madelyn Victoria has done something very different though, she’s traded anger for a melancholic introspection, and it’s one of the most nuanced country songs I heard in a very long time.

A natural storyteller, Victoria who made her debut with “He Only Loves Me on the Dance Floor” uses her quick wit and fantastic voice to tell the story of not the person you’re upset with who wasn’t your forever person, but about the people who maybe leave you better off because they’re not in your life anymore because they helped you grow. At first for Victoria is difficult to see herself as someone who didn’t “mess things up”, but it’s more complex than that and when she realizes this, she’s allowed herself to grow and show love to herself and the new things around her like her new man and her kids. It’s incredibly vulnerable and Victoria’s sweet and nibble voice sells every single word. Victoria certainly has had a distinguished career that’s led her to constantly climb up the music industry ladder and it’s great to see everything she’s learned up to this point is paying off.

She’s wildly talented and you can hear her confidence even behind the recording booth and despite the heavy material, she’s packaged it in a way that’s much fun and even wholesome in a way that plenty of people can find themselves dancing along to it. The instrumental is this kind of jaunty honky-tonk southern flavor with hints of soul and that blend helps set it apart from other country songs of this variety. One of my only major critiques would be that despite these great things, sometimes the song’s escalation is a little stiff. It’s never static mind you because Victoria’s lyrics always have a  clear sense of forwarding moment and the song certainly has an emotional climax, but you never feel the full effect of the kind of punch to the soul realizations that she has. This is a minor complaint however because everything surrounding the song is just so strong, I’d be hard-pressed for the average listener to get hung up on something like that. This song is a great call back to the kind of country that’s still around but doesn’t get the same kind of air time as a lot of more mainstream acts.

It’s more Glen Campbell in the way it’s trying to tell an actual well-rounded story and it grounds itself in the fact that a lot of country music is steeped in a lot of sadness, and she’s expertly told her story and we should all stick around to listen to more.