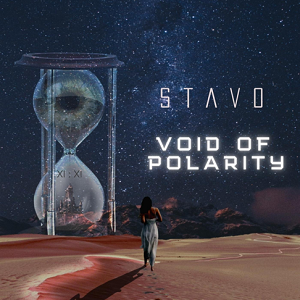 Who doesn’t love a good concept album? It’s the type of album that challenges its creators to craft something that functions as a fluid and thought-out story, but can also be consumed casually by the more “song to song” crowd without feeling bogged down by the weight of its own mythology. There are many artists who aren’t normally up to the challenge of something like that, but the group STAVO has certainly made a notable impression with the arrival of their album Void of Polarity XI:XI. It’s a rousing powerhouse of an album that both feels infinite and intimate, with something truly in it for everyone, ranging from instrumentals, experimental interludes, rock ballads of softer and more uplifting variety, but carrying a darker shadow and a hefty bag of compelling angst in its arsenal as well.

It’s a multifaceted piece of work that doesn’t skimp out on substance just as much as it’s filled with some rather compelling and precise authorial choices ranging from the lyrical delivery from singer Sharon Kaplun to the sometimes haunting larger than life galactic synths, strums, beeps, and busses woven so seamlessly with the electric guitar, bass and fantastic drum work all on display. In a time when a lot of music feels like a means to an end, “content” if you will, this is a unified vision that wants to provoke feelings and thoughts, and responses. Emotions run high throughout and many times listening I found myself moved or finding some piece of me I could relate to the album.

Without spoiling too much of the fun of the album which is in its initial discovery, it follows Indigo, a girl who wants to feel more, knowing she offers much to the world but doesn’t know what to do when it feels like the world is constantly knocking you down. In ways, her name-dropped track Indigo Child feels like it came from the Disney book of “What I want!” song, and that’s not an insult. It perfectly conveys the emotions and thoughts and trajectory of the album and how over the course of eleven tracks, Indigo will see herself challenged, spoken to, spoken down to, and finally find the strength within herself to command her destiny.

Surprises lurk around every track on this album from lyrics, callbacks, imagery that’s as powerful as the unique visuals chosen for the album artwork and there’s this purveying sense of mystery and the unknown that looms especially with the arrival of a set of characters that it’s best to go in blind to experience for yourself. Sometimes it can go a little long considering there are many breaks with solos but they’re always interesting and perfectly executed. At times, the lyrics can be a little too on the nose, but when you’re attempting to capture the true feelings of ennui and confusion like this album is, subtlety is for chumps and truth lies in its bluntness. Void of Polarity is exciting, moving, and truly a beautiful work of art.