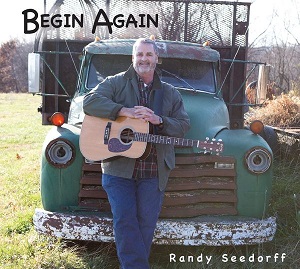 Compassion irradiates on Randy Seedorff’s Begin Again. Having performed and written music for nearly 30 years, Randy pours every bit of his happiness and relief, and nostalgia into this dense record. It’s not hard to understand why when nearly two decades ago Randy fell victim to an armed robbery that significantly changed his life and his perspective, and that gratitude extends to his music.

Now a pastor, he combines his love for the Lord alongside his passion for music and the result is a beautiful thing. Some of the songs, 3 in particular are on the longer side, one coming in at 6 minutes, and for some that might be a bit much. I personally enjoyed the more concise tracks, but I admire the ambition Seedorf clearly has his sights set on. Even then, the lengthier tracks are never self-indulgent and they’re so painfully genuine you can’t help but be won over incredibly quickly by the whole affair. I don’t know if I would call this a niche album depending on your faith, and while the overtone of Seedorff’s love of the lord permeates across the album, it never is condescending or alienating, this coming from someone who’s never had any sort of religious affinity or upbringing. The production on this album is also incredibly professional and pristine, and he’s found the perfect mix for his vocals and the instrumentation, which is great especially for those longer tracks so they never become grating or you truly feel the weight of them.

Vocally and performative energy-wise, Seedorff has this almost Bruce Springsteen quality to him. You know, that kind of humble, everyman reliability. Like a musical Clark Kent, Randy makes the most of people not quite knowing what to make of him. Even from his album cover, it’s just a happy man and his guitar. Certainly leaves a lot up to interpretation before listening, but when you do, the sounds are excellent and well thought out, mixing the acoustic guitar and percussion excellently, and he’s got a great penchant for a catchy hook too. Specifically starting out of the gate with the opener “Dream” which feels like it was immediately cut from the “Born to Run” cloth. It makes you smile at how happy this is for someone to be doing all the things he loves, and even when he challenges those who try to tell him otherwise, he never is sharp or negative, he just tells himself that he’s going to believe in his own strength backed by his faith and that will always lead him to success and happiness.

The whole album is filled with charming moments like that along with moments of nostalgia like in the track “Family Tree” which has a great chorus and wonderful imagery of a man’s potent love for his whole family and what he hopes to leave behind for them. It’s a very reflective album all the way through, down to the penultimate track “Why Me Lord”. Currently, you can check out his single “Family Tree” on most major streaming platforms.

Share
Previous Davy Williamson – “Down by the Fire” (EP)
Next “Void of Polarity XI:XI” (LP) – STAVO