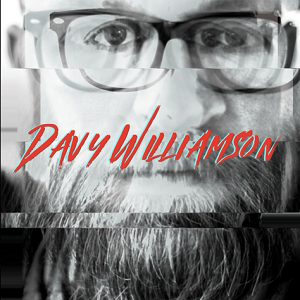 Davy Williamson – “Down by the Fire” (EP)

Rock music has undergone some serious identity crisis in the last few years. I always say at what point are we just going the throw away the concept of musical genre as a way to quantify these things because the lines are getting blurrier and blurrier. Like would you consider Maroon 5 a rock group? They have all the instruments, don’t they?

Genre, I think is only as needed as a means to describe a certain evocation and not exactly to say what is and what isn’t a type of band. Listening to Davy Williamson’s debut EP Down by the Fire, there were no doubts that this was a “proper” return to the description of what rock can be. It’s grungy and explosive with piercing yelling vocals and it definitely is owed still to the sounds of garage rock that are still impacting countless acts to this day.

Williamson has already had an eclectic musical career, working with bands like Third Class Passengers and Ma-Shot-Pa (fun name) but since then, Williamson has decided to try his hand at a solo career and the results are impressive and interesting, to say the least. It’s a briskly paced listen clocking in at only 23 minutes and each song rides by at a lightning pace, but you never lose any of the detail or texture that Williamson has certainly put into every song. It’s already garnered him a good amount of attention considering that his track and EP opener “Thing Disguise” which was released last year shot to a #1 on the Itunes Rock Songs chart in South Africa, and his subsequent release single “Cliche” soon followed in its footsteps.

It’s not hard to see why honestly. They’re bursting with personality as is the whole album that genuinely feels like it was crafted with a lot of attention and experimentation. It’s nice to get an EP that allows itself to breathe both with the interlude that casts a moody atmospheric almost Fleetwood Mac impressionable sound over the album and even closes with its own rendition of what could be considered a movie exit with the track titled “Outro”. The vocals are smooth and will remind you of acts like obviously Nirvana, but even obscure acts, like it, took me to think about the Japanese rock group “The Pillows” and their sounds that are equally as uncompromising and filled with energy. If I have a complaint, it’s that some of the lyrical content is a little on the repetitive side. It’s a lot of songs about the betrayal of trust, relationships, and pain, and luckily the instrumentation and his vocals make for a compelling performance, but it would be nice to zig when it feels like it’s zagging for quite some time.

That may be why the interludes and exits are so impactful where they’re placed because it just lets you breathe for a second and soak in everything you’ve heard up until that point. It’s an impressive debut that bodes well for Williamson.