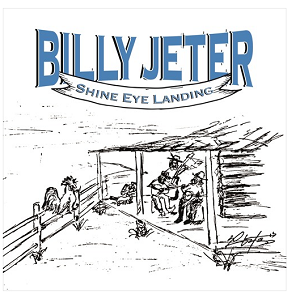 Arkansas born singer/songwriter Billy Jeter’s forthcoming album Shine Eye Landing is a new peak in his musical career. The ten-song collection expands on the merits of his past work without venturing away from what has made him successful so far. Maintaining such balance while developing his art is one of Shine Eye Landing’s finest off the radar achievements. There are several other strengths distinguishing his new release from less-inspired and run of the mill efforts; Jeter may utilize time-tested musical vehicles, but the playing is top shelf and stamped with stylishness all his own.

The instrumental qualities of “Orion”, the album opener, are tone-setting. Many listeners will lose themselves in the interplay between the guitar and piano. They trade low key salvos with each other during key passages but make an individual impact as well. Positioning the album’s title track so close to the album’s beginning, the second slot, is an indication of the confidence Jeter has in this material. It is well justified.  “Shine Eye Landing” has a restrained musical character; it has the same reflective, internalized spirit audible during the album’s first cut. The female backing vocals supporting Jeter offer an excellent counterpoint to Jeter’s voice.

“Sins of Me” has deceptive power present throughout the performance despite its languid pacing. It’s one of the album’s best examples of how well Jeter juggles accessibility and well-played literary sophistication in his lyrics and he underplays the stew of emotions bubbling beneath the song’s surface. The track’s fat slide guitar is a musical highlight but never dominates the recording. The title “Highwater Blues” instantly recalls Mississippi Delta bluesman Charley Patton, but there are echoes of similar takes such as Bob Dylan’s “High Water Everywhere” from his Love and Theft album. Jeter’s take on this traditional device owes a debt to Dylan’s penchant for imagistic turns, but it is never imitative thanks to Jeter’s unique imaginative power.

The elegant simplicity of “Song for Walter” likewise exudes crystalline-like sensitivity. It sounds like a strong breeze could scatter this performance into the wind, but the musicians excel threading together a delicate musical tapestry It’s another deeply felt and keenly observed poem set to music; many of Jeter’s works are capable of standing on their own divorced from their backing. His poetic vision mines the lengthy lexicon of Americana in various forms; Jeter proves himself, time after time, capable of pouring old wine into new bottles.