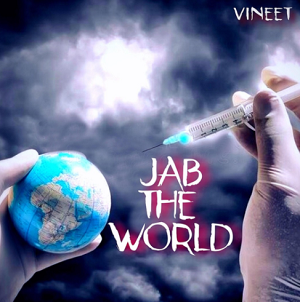 You can’t claim Indian singer/songwriter Vineet doesn’t have the best intentions. Or lacks idealism. His latest single “Jab the World” is a timely track written in the maelstrom of a worldwide pandemic that has left millions sick, dying, or dead. It celebrates the personal sacrifices made by front-line medical personality contending with the stark realities of this illness but goes further. Vineet drew further inspiration for this track from encountering the illogical and deep-seeded hates, racial and otherwise, that the COVID-19 pandemic revealed in many, particularly on social media, and it prompted him to hope for a day when science might be able to inoculate people against hate.

He adopts a rock music posture for the track. The guitar work has a synthesized tone rather than embracing a straight-ahead sound, but it works and Vineet’s strong natural vocals balance the musical attack. The track has live immediacy – there’s never any hint of manufactured or pre-programmed sound blemishing the song’s energy. It isn’t difficult to imagine the cut harboring the same impact in concert and it provides opportunities, as well, for Vineet to sing it a little different with each new performance.

The video for “Jab the World” enhances its power. Despite the seeming impossible distance humanity must travel to fulfill the song’s wishes, the video is bubbling with positive emotion, a jubilant celebration of the global community turning a corner at last with the pandemic, and the infectious affirmative spirit exhibited by many of the video’s participants will undoubtedly rub off on its viewers. It is filmed in rich and vibrant colors and its visual composition meshes well with the equally lively music.

Vineet’s singing embraces the same mood. He grabs the song’s lyric by its figurative neck and gives the words a sense of dramatic high stakes few contemporary singers can match. “Jab the World” convincingly makes the case that Vineet is far from a fringe player in modern music and, instead, has harnessed the necessary skill to claim a place on the global stage rather than being relegated to regional stardom. We may, in a relatively short amount of time, look back at this track as the moment when Vineet struck gold and “crossed over”, bringing his unique gifts to the world at large and finding the commercial acceptance he deserves.

The production puts it all into enviable perspective. “Jab the World” is what songcraft sounds like when a recording artist enters the studio with a clear vision of what they want to accomplish and how to get there. His self-assurance is audible to anyone paying attention. Vineet has scaled an early peak in his young career and there is no indication that new heights in the future will prove to be beyond his reach. “Jab the World” is the sort of songwriting and music we need as 2021 moves forward – intelligent, concerned with all of humanity but resisting any inclination to preach. He sings and writes from the heart, a blessing even in the best of times.