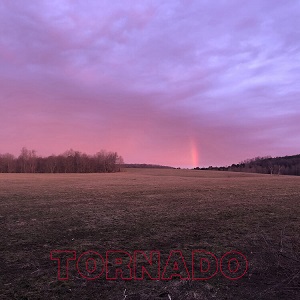 James Raftery is loath to let a good song go to waste. He refined and recorded the nine song collection Tornado during the pandemic-prompted lockdown, but the songs first came to life during the writing for 2017’s Everything. These piano-inspired ballads strip away any self-indulgent gloss in favor of functional stylistic flourishes and a thorough command of fundamentals. The self-produced sound of the collection may, at first impression, promise a DIY listening experience, but Raftery confounds such expectations with a thoroughly professional sound.

The elegiac qualities of the songs are impossible to ignore. It is present from the first. “Gardener” explores Raftery’s vocal range while still providing a consistent listening experience and the cinematic aspects of the song’s arrangement are undeniable. Despite these atmospheric touches, however, there isn’t a single moment smacking of pretentiousness. It, likewise, radiates strength despite its delicate sound.

The second track “Little Love” is another vocal gem. Raftery pairs his voice with a piano melody that sounds like it’s spinning in short tight circles. It doesn’t span the gamut of his vocal range as much as the opener. It doesn’t need to. The chorus is especially effective without ever risking overstatement. “Sideways Smile” is another powerful track. The chorus, once again, provides listeners with a peak moment but it’s Raftery’s portrayal of a relationship turned thorny that will linger with many.

“The Wonder That Is In Your Heart” may be a little too saccharine for some, but it’s difficult to not admire its wide-open vulnerability. His arranging powers are evident throughout Tornado but his skill structuring the vocals that stands out time and again. His piano playing is splendid throughout the album, but it’s through his voice that we find our paths leading to the heart of each song.

“Strange to Me” has a light classical touch that complements both the verses and chorus. This is a little more hushed than some earlier tracks but, nonetheless, dovetails into Tornado’s overall mood. There are a handful of striking rhymes present in the lyrics and many much more famous songwriters would be happy to claim several of the track’s lines as their own. “You and I” has even more interiority than the preceding songs. The emotional intensity, however, reaches the same heights and it’s a testament to Raftery’s performing instincts that he knows just how much to push. The supporting vocals answering his own lead are especially potent.

“Tornado” concludes the album on a satisfying note. It is much like the earlier “Strange to Me” in its muted approach and Raftery cannily utilizes space to create additional drama during the track. The inclusion of electronic instrumentation never obscures the fact that, at its heart, Raftery’s piano playing holds the musical structure together. His singing underlines it in emphatic fashion. James Raftery is far from his days working on indie horror films and Tornado, his latest release, once again proves devoting himself to music was the right decision. It’s arguably his finest release yet and, without, the most heartfelt in a long career of wearing that organ on his sleeve.

User Rating: Be the first one !
Share
Previous EMILY DACCARRET
Next MAINFELT