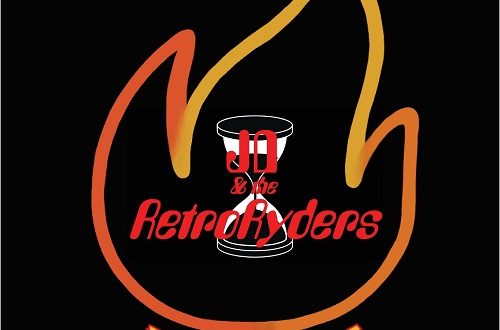 Consider JD and the RetroRyders to be proverbial keepers of the flame. This unique seven piece band based out of Huntington Beach, California is led by front man Joe DeMeo with two supporting vocalists, a drummer, guitarist, bass player, and an additional percussionist. They have four well-received releases under their belt since their 2019 debut and the band’s new effort, a six song EP entitled . The title is one reflection of the band’s idiosyncratic and inherently playful character. There is, without question, a “good time” spirit driving a lot of the band’s music, but it’s not their sole raison d’etre. Other strands are present in JD and the RetroRyders’ music, namely a penchant for characters and storytelling, that many listeners will relish.

Newcomers will understand exactly what they’re dealing with after hearing “All Summer Long”. It’s hard-edged power rock, as the band dubs it, essentially power pop that cuts deeper and bristles with punky energy. It’s standard fare, that’s true, but a close listen to the song’s lyrics makes it clear DeMeo has crafted his own language for the band’s material. The chorus is especially effective. DeMeo’s supporting vocals from the two Nicoles, Perreira and Kubis, are memorable and highlight an element of the band that further separates them from their brethren.

Kubis and Perreira help the chorus for “Destiny” sink in deeper as well. The opening seconds of the track remind me of the beginning of an AC/DC tune, a little, though lighter on the distortion. It’s the sort of straight-forward rock guitar JD & the RetroRyders rely on and slowing down their customary 99 mile a hour roar down to an energetic mid-tempo jaunt helps the band dig deeper into the song’s groove. “I Gotta Know” eschews the classic rock feel of “Destiny” in favor of raucous attack, all six strings blazing, and touched with added effects absent from its predecessor. JD and the RetroRyders pick up the pace, as well, and the go for broke fury driving this track will make it a live favorite.

“Luv You” will have supporters and detractors in equal measure. Detractors will hear it as a variation on the album’s standard theme without the necessary creative spark capable of transforming it. The song’s fans, however, will hear how JD & the RetroRyders bring the garage rock flavor into their music while spotlighting their melodic merits as well. HOTNSIXY’s best chorus comes with the penultimate cut “Rock N Roll Now” and the verses pack the needed punch as well. There are no half-measures with this band’s music; they aren’t intending to remake the songwriting wheel, but deliver their material with unquestionable passion.

JD & the RetroRyders are a live band, first and foremost. That’s apparent hearing these songs as they couldn’t possibly be more self-consciously designed for concert performance. The band’s songwriting skills are polished without the songs ever sounding plotted out; it’s far less common than you might think. Their fifth studio release continues in the same tradition they began establishing with their debut and they sound just as enthusiastic as ever.

User Rating: Be the first one !
Share
Previous Cinemartyr “Opt Out” (LP)
Next Le Sonic “I’ll Be The One” (feat. Lauran Beluzo) (SINGLE)