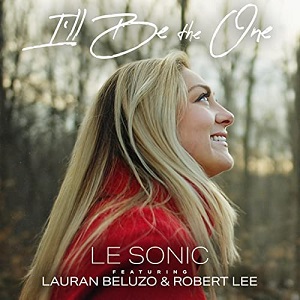 Le Sonic “I’ll Be The One” (feat. Lauran Beluzo) (SINGLE)

It’s been a long time since this sort of music has been able to gain and keep a foothold in the modern music world. Smooth jazz is often consigned to the netherworld of cocktail bars, period piece movie soundtracks, or the general oblivion of golden oldie radio stations. Le Sonic, however, ignores all of that. The band’s second single “I’ll Be The One” basically picks up where their first, “Any Moment”, left off and carries things a few crucial steps forward. It’s the latest product of Gary Lefkowith and Mike Rogers’ songwriting partnership and shows that it’s continuing to blossom rather than proving to be an one hit wonder.

They have had a hit, without a doubt. The aforementioned “Any Moment” scaled the heights of Billboard’s Smooth Jazz charts, snagging the top perch, and it’s easy to expect the same from “I’ll Be The One”. The production frames the new single with an even hand, everything is represented with an ear turned towards balance, and it’s an overall airy listening experience. The song’s singer, Lauren Beluzo, is a former American Idol contestant and 2 time winner of Amateur Night at the Apollo, but she sounds ready for prime time here.

Her phrasing is what will capture many. She glides through the song’s lyrics with confidence and attentiveness. There’s no veering off on wild tangents or attempting to impress listeners with her vocal chops. Her gifts are apparent without trumpets and bugles announcing their arrival. It’s a pleasure, as well, to hear a singer so keyed into a song’s lyrical content rather than tailoring her performance to the music exclusively. She never spreads herself too thin.

Nor does the music. It is relatively spartan, only a few accompanying instruments, but they bear mentioning. Guitarist Robert Lee, member of 60’s legends The Mysterians, turns up here and delivers some priceless lines that punctuate the song. Piano and drumming is crucial as well. The latter comes with brushes rather than sticks, but never sacrifices physicality. The percussion is a good fit for the piano playing as the ascending melodies and punchy fills double its effect for listeners.

There’s no reason why this shouldn’t hit number one as well. Le Sonic’s “I’ll Be the One” sounds like a song where the principles involved knew exactly what they wanted when they began the recording process and didn’t fuss over much. It’s not just a mark of professionalism. It’s a mark, as well, of truly inspired artistry that’s reflected in each aspect of the track. The lyrical content does not attempt remaking the wheel, it isn’t its purview, but communicates its message with clarity and well-chosen language.

The duo’s second single elevates them to a higher plateau than before. They have joined the first rank now, no longer the breakout artist, as they were deemed by influential Beats Magazine in 2021, but among the vanguard. They are well-suited for the spot and it’s easy to envision them making the most of it moving forward from here.