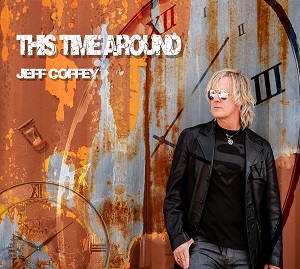 Jeff Coffey “This Time Around” (LP)

When it comes to creating a sense of familiarity and nostalgia-based around the sounds you grew up with, it only makes sense to listen to someone from a band responsible for crafting those very sounds. Jeff Coffey, though not a founding member, grew up loving the music of Chicago and (understandably) jumped at the insane chance to come aboard as the lead tenor vocalist and bassist for the band for a year and a half — the experience working with such a monumental and iconic group has more than paid off by the boatload if Coffey’s new album This Time Around is anything to go off of. Boasting a solid twelve tracks, This Time Around is a fantastic album written and recorded by a guy who knows without a doubt exactly what he wants to put down on the record, which should be expected from this being Coffey’s fourth solo release.

Opening with “Back and Blue,” listeners are immediately treated to a fun intro track; canned drums play under Jeff Coffey’s vocals before opening up into a fully-established band sound, and the confident dynamic already delivered from the very start of This Time Around is something to savor. The instruments feel greatly utilized from the starting line with harmonies and enough of a punch to stand against, while still fully complementing, Coffey’s smooth voice, and the next track “All I Need Is Love” only continues this trend. The added plucky strings bring a different layer of musical intellect to the album as a whole, bringing out a different side of the singer as the lyrics offer up a sense of pure emotional vulnerability. “Someday” works as a desperate plea for the ever-changing world’s ever-increasing dilemmas with its fully-revealed heart hitting home hard following so soon after the previous love song.

Throughout This Time Around, the sounds established within the first three tracks more or less work as the guidelines for the roadmap that the rest of the album will follow. The song titles make do with their vague simplicity, allowing the songs to speak for themselves through lyrical content and performance without lending way to preconceived notions. Album highlight “Record Player” feels like a possible single-to-be in its radio-friendly approach and country overtones, with its composition giving way to contemporary Southern trademarks while also catering to an older rock-genre audience with the lyrical content. Upbeat album closer “Got To Get Away” ties the entirety of This Time Around together, but ultimately works as a cliffhanger of what might still lay up Coffey’s sleeve with future projects. The guitarwork, namely the solo a little over halfway through, ends with the vocals returning and belting the song’s title to great effect.

The meat and potatoes of This Time Around is something seasoned listeners of classic rock will certainly find themselves drawn to. Coffey’s talent and rock star persona are more than enough for most to dig their teeth into, but if that’s not enough, then the ear he has for crafting catchy and fresh soundscapes to play around in will certainly do the trick. This Time Around is an album that can balance on the thin line of tickling nostalgia for some while bringing new voices and sounds into an established genre, and for that alone it is a fantastic success.

User Rating: Be the first one !
Share
Previous Nightfly – “Who’s In” (SINGLE/VIDEO)
Next The Mark – “Floating Downstream” (LP)