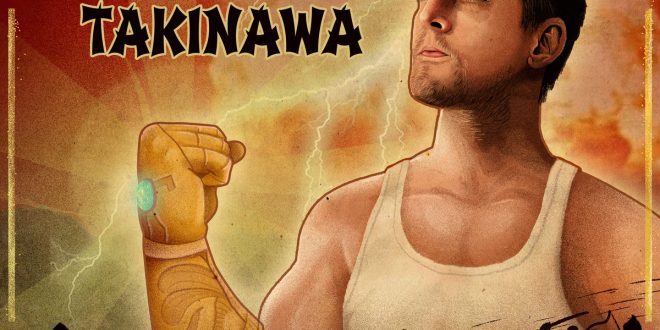 Jeremy Rice’s improbably titled new release Jeremy Rice and the Legendary Fist of Takinawa is Rice’s first since relocating to Quebec City in 2016. It likewise reflects lessons learned from his time scoring television programs, video games, and commercials in addition to his pre-existing solo work and tenure with bands such as The Sellouts, The Thymes, and Timescore. There is a strong sense, however, of Rice elevating “his game” listening to this album. It delves deeper into his potential than any previous release and its vulnerability makes Rice’s musical skills all the more potent. The album’s first single “Arrilanne” garnered airplay across the globe including spots in the U.K., Spain, France, and his native Canada and the second single “Somebody Like You” is set to do the same along with its accompanying video.

The videos for both “Arrilanne” and “Somebody Like You” shows you can accomplish a lot in terms of visual accompaniment with limited budgets and an assortment of unostentatious good ideas. The album’s first cut, however, is “Johnny Rodgers”., a lyrically assertive number with a gentle yet insistent musical stride. It crescendos at the right times and uses keyboards well alongside skeletal guitar. The aforementioned “Arrilanne” and “Somebody Like You” make for an excellent one-two punch as the album’s second and third tracks. The former is the more guitar oriented of the two tracks and the latter is a dramatic pop gem cut to perfect scale with a buildup that never places a single foot wrong.

“NME” is, arguably, the cleverest bit of songwriting you’ll encounter on this release and one of its more guitar heavy entries. It’s notable how Rice incorporates rock influences into his music. Pop sounds are never far from the surface of his compositions and guitar blends in effortlessly giving the track teeth it would otherwise lack. “Beleev” is one of the more inspired cuts included on the release. It has curious kinetic energy, the percussive quality of the piano giving it additional punch, and Rice surprising listeners perhaps with his vocal flexibility.

The album’s title song, essentially, is the eighth track “The Legendary Fist of Takinawa”, a note perfect illustration of Rice’s songwriting imagination. It is a rollicking guitar fueled musical joyride and provides this vibrant collection with a thoroughly satisfying closer. Jeremy Rice has written and recorded one of the more captivating indie releases of 2019 with Jeremy Rice and the Legendary Fist of Takinawa.