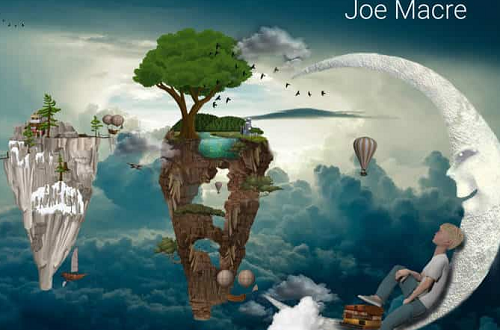 If you listen to Joe Macre’s The Dream Is Free without reading any accompanying press about him, you may come away from an initial hearing envisioning Macre as a photogenic twenty-something singer/songwriter with a penchant for progressive music. It will startle such listeners to discover that Macre is, instead, a veteran musician from the genre’s second generation emerging in the 1970s. In Macre’s case, his arrival with the band Crack the Sky promised boundless fortune and rock immortality with Rolling Stone hailing their first album as 1975’s debut of the year.

It wasn’t to be, however. Crack the Sky’s disastrously improbable bad fortune resulted in their impressive debut reaching only a fraction of its intended audience and never making the resulting impact that the album quality deserved. The band never recovered its momentum, but Macre’s continued work with a release such as The Dream is Free gives listeners powerful personal testimony that the band’s former bassist and one of its most important songwriting voices lives and breathes music with the same enthusiasm as before.

“Drop Me Off at the Rainbow” aches with emotion and will find a home with listeners thanks to its clear authenticity, All but the willfully deaf will hear the affection and passion rife in Macre’s voice as he basically makes a statement for listeners about his abiding principles. You believe every word. There are some elements of the album’s production that merit a less a DIY approach to the sound and this highlights that aspect of The Dream is Free. Its sonic limitations, however, are never an obstacle to appreciating the album’s power.

“Not Looking Back Tonight” sounds like it was built, at least initially, around a bass riff. This is a relatively straightforward prog-inspired rocker, but the overall idea is somewhat slim. Evidence of that comes with the repetitious ending, but it’s never outright wearisome. Its successor “Tomorrow is Today”, however, soars higher on the back of another outstanding Macre bass line and a fully fleshed-out arrangement. The vocal harmonies are memorable, as well, and contribute mightily to an overall exceptional whole.

“Get Up, Crack Down” surges with vitality after a brief and colorful synthesizer introduction. Each of the ten tracks Macre has included on the album crackle with the energy of someone much younger and it’s an audible illustration of his engagement with the material. The album closer “The Dark Sky Sea” is the atmospheric final curtain that the song title implies while foregoing the pretentiousness that such a move risks. Macre has the same sort of artistic control that defined Crack the Sky’s bygone debut and it’s refreshing to hear an older musician who hasn’t sacrificed anything from his music over the years.

Let’s hope we hear more from Joe Macre in quick order following a release such as this. The Dream Is Free has seriousness, entertainment, musical uplift, and progressive textures, and infectious pop grooves galore for listeners to enjoy and nothing suggests such attributes are in short supply with his music.

User Rating: Be the first one !
Share
Previous ANGELA PARCHETTA
Next ERIN MCLENDON