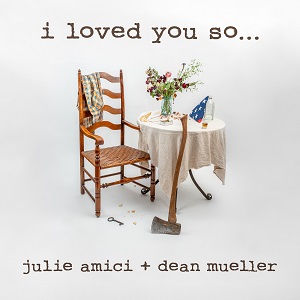 “Cause it’s hot in the city / It’s so hot in the city / You know it’s hot in the city / And I just can’t stand the heat” croons a seductive Julie Amici in the song “Hot in the City,” one of the cornerstone tracks on her new album alongside Dean Mueller, I Loved You So, due out this coming April 10th everywhere quality indie Americana is sold and streamed. In this composition, along with the other ten included on I Loved You So, Julie Amici & Dean Mueller mix pastoral poetry and evocative vocals to produce something that is arguably pure magic for the spring season, and even if you’re not the biggest fan of alternative folk – and its most experimental strain, as represented by these two players – I would still recommend giving it a close listen when it hits record store shelves.

The production quality that I Loved You So enjoys is sparkling from the time we first meet the music in “Flannel Shirt” to the very instant in which the LP comes to a close in the powerful anti-violence anthem “Read Through Tears,” but I would point out that for all of the varnish these songs are boasting, none of the rustic integrity of tracks like the title cut,” “Blind Beulah” and “Sardines and Saltines” ends up sacrificed in the name of pop polish. Julie Amici & Dean Mueller are the new kids on the block to most of us, but compared to their major label counterparts, they’re sounding a lot more disciplined and focused as composers in this hot new album.

There’s a bit of a throwback element to I Loved You So, especially in the tracks “Turn the Key,” the bruising “Faces in Things” and plaintive folk tune “Daddy,” but I wouldn’t go as far as to call this record a puritan homage to the music of yesteryear. There’s an experimental edge to all of the big grooves we discover in this LP, and moreover, the lyrics that join them with the melodic backdrop, and while the familiar tone of songs like “Blind Beulah” prevent I Loved You So from sounding so avant-garde that it wouldn’t appeal to mainstream audiences, there’s no getting around the fact that this will attract more college radio attention than it will the standard FM format (which isn’t such a bad thing, really).

If this album is just a sample of what’s still to come from Julie Amici & Dean Mueller’s shared recording sessions, I think it would be perfectly safe to expect a lot more adulation around their output from here on out. I had heard a bit of Amici’s music prior to now, and though I walked away impressed, there’s something really special that Mueller is bringing out of her in this record that I’m dying to hear more of. Something tells me I’ll have my chance soon enough, and judging from the critical response to I Loved You So thus far, I doubt I’m the only listener excited for their future.

User Rating: Be the first one !
Share
Previous “My Internet Lover” by multi-talented Des Cox
Next BLUE FOR BLACK