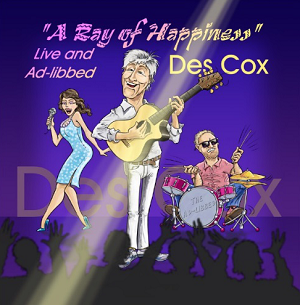 In his new single, “My Internet Lover,” multitalented artist Des Cox brings listeners an excerpt from his zany, ninety minute stage show in the form of a slow-rolling composition fit for listeners of all ages. As eclectic as his personality is, Cox’s “My Internet Lover” is definitely a pop-influenced number that steers clear of the plasticity commonly associated with mainstream music, but it isn’t a total work of experimentation. For those of us who appreciate a simplistic, black and white brand of old school melodicism, this certainly a song worth checking out no matter which way you slice it.

There’s a great swing to the rhythm in this track that arguably contributes as much to the narrative as the lyrics do. There’s a case to be made that, were it not as swaggering as it is in this instance, the beats in “My Internet Lover” wouldn’t have been nearly as seductive as they are here, but nevertheless, that’s a road we’ll never have to take. Cox cares about multidimensional musicianship, and I think that’s made more than a little clear to anyone who gives this all-new single a close listen.

The tonality of the guitar strings in “My Internet Lover” is startlingly sharp and appealing, especially when considering just how raw and unvarnished most of the other components in the track are. Initially an improvised recording (much as many of his stage performances are), this song shows listeners just how dexterous a player Des Cox can be when the mood is right and he’s firing on all cylinders. There’s never a moment in which he sounds even slightly overwhelmed or in over his head with the task at hand. Contrarily, I would say that he exudes more confidence than some of his contemporaries in the British underground have recently.

While the master mix here is definitely pretty rough around the edges, it has a certain Daniel Johnston-esque feel to its construction that immediately won me over as both a critic and a fan. There’s so much color essentially left unfiltered in this song, and when taking into account just how artificial much of the most lauded pop in the world has been over the past half-decade, this makes “My Internet Lover” all the more attractive to audiophiles. It might be a tongue-in-cheek effort from an artist adept at everything from comedy to puppets and percussion-met crooning, but it’s nevertheless a tough song to get out of your head once you’ve heard it for the first time.

Des Cox is an eccentric player without debate, and this new single just might be his ultimate identity song. Whether you’re a student of avant-gardism or simply someone who likes to surf the sounds found on the left side of the dial from time to time, “My Internet Lover” is a rollicking folk-pop tune that instantly tells you what its core aesthetics are all about. It’s a glimpse into the world of a deeply talented artist, and hopefully not the only one we’ll be afforded in the years ahead.

The music of DES COX has been heard all over the world in partnership with the radio plugging services offered by Musik and Film Radio Promotions Division.  Learn more https://musikandfilm.com