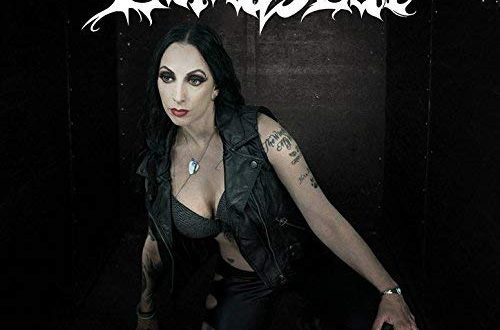 Lana Blac releases “Suck you In”

A whispering crackle seeps through the darkness and slowly triggers a threatening sonic explosion in the first few seconds of Lana Blac’s “Suck You In,” the latest single from her new album Nocturnal. A pulsating drum beat nudges us into the flames being ignited by Blac’s vocal, and before we have a chance to realize just what is unfolding around us we become entrapped in the rolling rhythms that are pulling us asunder. The bass is bulky and unwilling to comply with the crunchy but consistent grooves; instead of supporting the foundation of the percussion, it’s straight up driving the energy of the track.

Lana Blac floats around us in the mix, edging between the thumping riffs and narrowly discharging an electrifying melody that keeps us clinging on to her words for dear life. Her verses are surreal and somewhat distant in comparison to the in-your-face nature of the instruments, but the limelight never drifts from her intimidating control. An ominous synth growls and spits fire around the drums as we inch closer and closer towards the chorus, and the mix follows suit; each element in the track grows larger than life and suddenly we feel as though we’re in the presence of giants instead of ordinary humans playing earthly instruments.

We’re told of angels and demons, heaven and hell, and the contrast in the lyrical themes is all the more emphasized by the texture in the music itself. There’s a constant sense of urgency that joins us when Blac starts to sing and follows us well after the song has finished. The structure is formless to a certain degree, allowing for the climax to be long and drawn out, creating more tension than we know what to do with and leaving an impression that few listeners will soon forget. When coupled with this dynamic and bass-heavy mix, “Suck You In” becomes so much more than your standard metal song; it actually pushes the boundaries of its genre’s limitations.

The chorus whips around at us with a thrash-inspired rhythm that doesn’t go completely off the rails but definitely hints at the possibility of an extended jam when played live. By design this is much more slender and fluidly arranged than most alternative metal tracks that I’ve heard this year, but it doesn’t give up any of its stinging tone to create expanded accessibility. Blac’s vocal track isn’t over-processed or bluntly mixed (as would be more common in metalcore or even melodic death metal) and there’s a touch of industrial artificiality, though it never extends to the substance of the song itself.

Burly riffs and cutthroat basslines might be the two key ingredients in making a smart heavy metal song in 2018, but Lana Blac’s “Suck You In” doesn’t just serve up the makings of a hard-hitting rocker – it presents us with a much more exciting blend of metal magic that isn’t restricted by the works of her predecessors. Like the rest of Nocturnal, this single has the stylishness of a modern rock song and the primordial strength of a classic metal monstrosity, but it never indulges in one side of its personality over another. Put simply, this is a fine introduction to Lana Blac’s addictive breed of darkness.

The music of Lana Blac has been heard all over the world due to the promotional services offered by Danie Cortese Entertainment & Publicity. Learn more here – http://www.daniecorteseent.com/