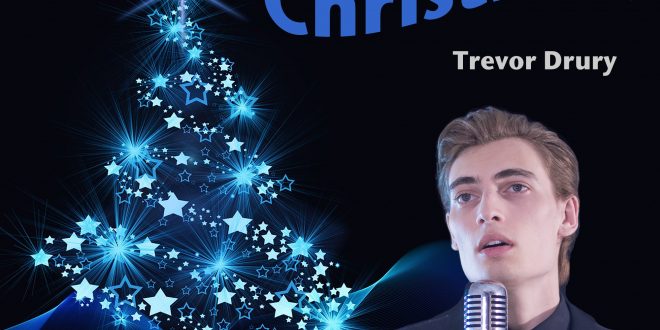 Multitalented singer and performer Trevor Drury has proven himself to be an exquisitely adept vocalist and songwriter in his critically acclaimed original solo material, and this Christmas he takes on arguably the hardest subgenre in all of pop – holiday music. Covering the undebatable seasonal standard “Blue Christmas,” Drury tackles one of the most beloved compositions in the discography of the legendary Elvis Presley, who much like Drury emerged from relative obscurity to set a world hungry for big grooves and sensational melodies on fire when we needed it most. Carefully constructed as to preserve the integrity of the original while also expanding on Elvis’ trademark sway with his own blistering swagger, Drury applies a fresh varnishing to a song that truly needs no introduction.

Elvis’ rendition of “Blue Christmas” was steeped in blues swing that was partly proto-rock but could also be described as a conventional vocal ballad, and what Drury does with the track here somewhat follows the same crossover-style formula. His vocals are stoic, even black and white against the backdrop of the opulent instrumentation, but the rhythm is jittery and urban by design. The implied stomp of the original is absent here, but in its place there’s a decadent reverb that springs back to the step of Drury’s delicately dispensed lyrics. It’s not a full blown hybrid by any stretch of your imagination, but “Blue Christmas” definitely exploits two of Trevor Drury’s most attractive sonic attributes; his stone cold execution and his infectious, wildly boisterous brand of poppy confidence.

The mix of this single is extremely muscular, to the point where I would even compare it to heavier rock songs that tend to boast a scooped EQ as opposed to a more balanced one. Thanks to the clarity in the production, we’re able to get an up close and personal look at the intricate studded textures in Drury’s vocals, which in my opinion have become even more defined since the release of his smash hit “Jealousy.” This is indeed a cover song, but to suggest that Drury is holding anything back from us or using Elvis’ emotions as some sort of smokescreen to conceal his own would be criminally inaccurate. He’s being himself with us in this song, to the point where his jarring utterance of the chorus verse feels almost more authentic and heartbreaking than what we discovered in the original recording.

Nothing could ever beat the classic “Blue Christmas,” but you can certainly make the case that Trevor Drury comes awfully close with this latest single. Drury, unlike many of his more experienced peers and industrial elders, seems to know exactly what it takes to cover an iconic song without coming off as a hack or a fanboy; instead of manipulating the framework, he doesn’t attempt to alter the pace nor the melancholic tone of the composition in the least. He wanders through the words with a childlike wonderment that is endearing, accessible and boldly intimate, and even when it feels like he’s laying on the charisma thicker than he needs to, this track never ventures into overindulgent territory. This is Trevor Drury’s Christmas card to the world, and it’s far more emotional and passionate than anything you’ll find in a Hallmark store.

User Rating: Be the first one !
Share
Previous Lana Blac releases “Suck you In”
Next Seven Against Thebes release follow-up  Album