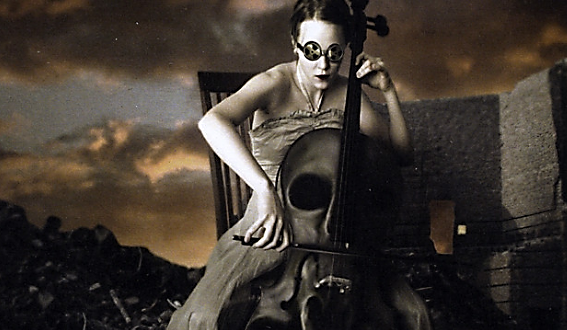 In order to properly define rock music, you must be able to understand and subsequently appreciate sonic physicality. One of the greatest songwriters of the last 25 years said that rock n’ roll isn’t about safety, and although some would argue that the statement doesn’t apply to modern rock music, Seven Against Thebes think otherwise. The Washington state-based group’s new album Art of Deception follows the same path that the region’s most celebrated bands traced more than thirty years ago, but the guys weren’t afraid to venture into uncharted territory whenever possible. Through layers of blistering guitar, stampeding drums, a bass as big as a mountain and vocals that transcend the boundaries of pop, Art of Deception might be a journey into the molten core of hard rock, but it’s hardly a fictitious representation of the genre.

Let’s talk about Mr. Black’s dexterous bass play on Art of Deception. “Ashes 2 Ashes” and “Mastervision” are essentially a clinic on how to illustrate a vicious bottom end without overtaking the percussion or vocals. “Judas Kiss” was enough to break one of my weaker speakers upon my first spin of the record, but it has nothing to do with the ultimate mix of the track. While production levels on Art of Deception are top notch, the players themselves are the ones responsible for yielding all of the energy that the listeners absorb over the course of the album. Mr. Black has got enough rhythm to push the band through any wall, and he doesn’t hold back in doing as much anywhere on this record.

It’s often said that the soul of a rock band lies in its guitarist, and Cyrus Rhodes does his part to lay some pretty intense string carnage on Art of Deception. In “’Til Death Do Us Part,” Rhodes throttles us forward with a rigid groove that descends into singer Rusty Hoyle’s melody like a ton of bricks hitting a glass window. Shattering on impact, the vocals become enmeshed in the violent riff like jagged pieces of glass, and we’re forced to dodge the shrapnel as drummer Bruce Burgess hammers away at the tempo. It’s metallic, but I wouldn’t call it heavy metal. Rhodes is much more restrained than the typical metal guitarist, though when he’s got the right opening he’s not timid about adding his own splash of color to the song.

Progressive, nimble and wired for detonation, Art of Deception gives rock music’s most loyal fans a glimmer of hope that the fierce genre of electrified harmonies that got inspired a revolution some half century ago is still alive and kicking in the 21st century. Devoid of any overbearing commercial influences and staunchly independent in its presentation,Art of Deception is a critical high point for Seven Against Thebes. I’m certain that this won’t be their last trip to the studio, but for the moment I think we can certify this record as their pinnacle act in a storied career that has seen them continue to produce superior music amidst so many disappointing releases by their peers.