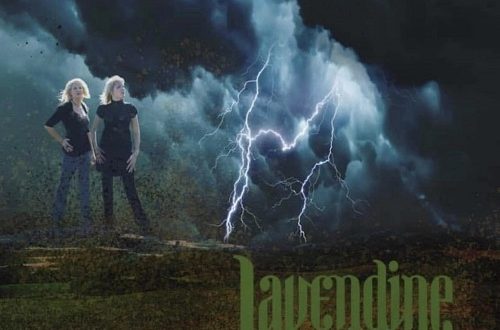 Coming to us fully-loaded with a righteous riff that set off a hurricane if given the right set of speakers to be filtered through, Lavendine’s “Rapture” doesn’t waste our time with a long, drawn out introduction to its fireworks – it gets right into the business of dispensing pure color. From a lyrical standpoint, “Rapture” is exactly what its title would have us believe it to be about, but there’s something far more cryptic and metaphorical about its statements when we look a little closer at the subject through the lens of the sonic virtuosities transpiring in the backdrop. There isn’t anything to come between artist and audience in this track – in fact, I would even say that this is one of the more raw, unapologetically potent crossover pop songs that I’ve listened to in the past summer.

Lavendine are intent on painting us a picture with all of the different instrumental tools that have been set before them in the recording studio, and while their voices are the strongest elements to reckon with in this single, they’re not the only reason why I would deem it one of the best songs of its kind to emerge on the charts this season.

The instrumental captivation in “Rapture” starts with the strings and slowly but surely bleeds into the percussion, which enters the mix a little heavier than it needs to (but for reasons that become more than obvious by the time we get into the chorus). The tone of the lyrics is reflected beautifully in the musical bedrock of the beats, some of which exhibit a hard rock influence that isn’t as tempered down as some might assume it would be – at least for the purposes of appealing to a pop/CCM audience. Lavendine were going for a power ballad-style hook here, and its dark hue bleeds into their vocal harmony in a way that I wouldn’t change for anything, even if it means shedding some of the sexier varnish that is often required to make it on the FM dial. It might be fun to hear an acoustic version of “Rapture” just to hear how much power these two singers have in a folkier setting; my gut tells that, based on what they’ve done in this single, it would likely be just as stirring.

If this is representative of who Lavendine are as a duo, and more importantly, the kind of music that they want their brand to become known for in the 2020s, they’re going to be getting a lot more attention from both the secular and indie gospel circuits in the next year-plus. “Rapture” vaults between the two angles it aesthetically borrows from rather nimbly, but I don’t think this should suggest a desire to sell-out the songcraft Lavendine already ascribe to in their professional lives. They’ve got a long road ahead of them, but with material like this in their repertoire, I’m sure we’re going to be seeing and hearing a lot more from these two soon.