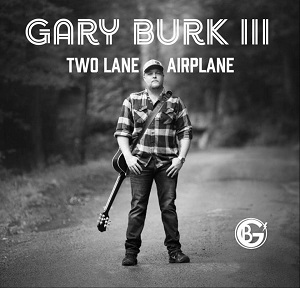 Rising out of the silence with a warm growl of the guitar, there isn’t any doubt that Gary Burk III means business upon listening to the opening instrumental salvo that gets his new single “Two Lane Airplane” stated with a bang. The melodic fireworks are pretty potent, and even though they’re short and sweet in preparation for the vocal magic soon to come ripping out of the speakers in just a few brief moments, they’re strong enough to set up the mood without ever uttering a single word. Burk’s voice has the weight to move mountains when he wants to, but I like that he begins this song by illustrating an aesthetical balance frequently overlooked by country musicians of his age group.

When we do get to the singing, there’s nothing powerful enough in this mix to hold the ground that Gary Burk III’s vocal does. He’s got melodic prowess like few others I’ve listened to in the country music underground lately, and for our benefit, he’s exploiting his gifts for literally everything they’re worth in this instance. I would have backed off the piano’s volume just a little bit more than he did as we sway around the verses between the kickoff and the climax, but aside from a couple of surface-level issues like this, there’s really nothing wrong with the means Burk’s employing to get to the promised land here. He’s got a lot of spunk, but he knows how to remain controlled when he needs to.

As far as the production quality goes, this is undisputedly the most radio-friendly sound that Burk could have chosen when trying to put the finishing touches on “Two Lane Airplane,” but I don’t think he should be criticized for going with something accessible when he was constructing this brand new single. He’s got plenty of reasons to break free from the indie beat, and if I were in his shoes and looking at the skillset he’s working with on a daily basis, I wouldn’t waste any more time trying to appease the impossible critics of the American underground. Burk has something marketable in his make-up, and I’m happy to see him using it the way it was always meant to be in this track.

“Two Lane Airplane” finishes us off with as much panache as it begins with, and being that it’s less than three minutes long in total running time, it is definitely the kind of song that you can listen to a couple of times on repeat if you’re susceptible to the addictiveness of modern Americana. Country music’s greatest heroes have always been those who didn’t play by the rules, and while it’s debatable how much of a solid rebel Gary Burk III is in “Two Lane Airplane,” what isn’t in question is how much he loves this genre. He’s putting every part of his soul into this performance, and I don’t think you need to be a trained music critic or professional arts journalist covering Nashville to recognize that at all.