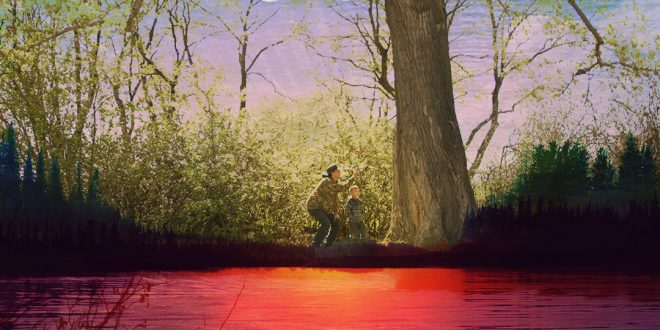 In the new single “Lonely Boy,” Midnight Shine and their charismatic frontman Adrian Sutherland deliver one of the most searing performances that they’ve attached their well-respected moniker to thus far, and while the content of the composition is more than satisfying on its own, the music video for the track is equally attractive (and quite moving, I might add). Midnight Shine hold absolutely nothing back from us on the instrumental, lyrical and production fronts, and although they’ve turned out more than one evocative piece of music since originally forming some years ago, I think that this just might qualify as one of their most profoundly well-rounded and sonically robust single/video combos to see widespread release in the last couple of years.

Cosmetically speaking, “Lonely Boy” is a really brooding song that piles on a lot of emotion through its vivid vocal harmonies, all of which dispense a wallop of weighty tones that are certain to get even the most discriminating of rock enthusiasts excited about what lies around the next bend in the track. The twists and turns in the lyrical structure don’t lend as much to an enigmatic story as they do an ascension towards a climactic fever pitch in the chorus that goes totally unmatched among all of the music that we hear on Midnight Shine’s 2018 album High Road. This piece is intricately detailed to no end, and yet it still lacks the needless indulgences that have become all too commonplace south of the border this summer.

The chemistry between the players in Midnight Shine is unbelievably strong and 100% led by their linchpin lead singer, the incomparable Adrian Sutherland, who is definitely at the top of his game in this latest recording. It’s hard to believe that this group of musicians found each other almost totally by chance nearly a decade ago, as they exude the very essence of what a strong artistic relationship is supposed to look and sound like in “Lonely Boy,” but to be fair, they’ve had a lot of time in the spotlight together to hone all of their best talents as a unit. Simply put, they’ve really never sounded quite as in-sync as they do in this song and music video, the latter of which stands as a Hollywood-league addition to what is already an immaculate catalogue of dispatches.

Midnight Shine are definitely one of Canada’s best hidden gems, and if “Lonely Boy” manages to get into steady rotation in the United States between now and the year’s expiration, there isn’t a doubt in my mind that this group is going to start getting the international accolades from critics that they’ve always deserved. They’ve come an awful long way since cutting their very first album together, and from the looks of this latest slab of rock n’ roll thunder, their momentum isn’t going to be slowing down anytime soon. From start to finish, “Lonely Boy” is a composition that warms the heart on the coldest of afternoons, which isn’t something that can be said for most contemporary pop right now.

User Rating: Be the first one !
Share
Previous CLO
Next Milquetoast & Co release EP for the Ages