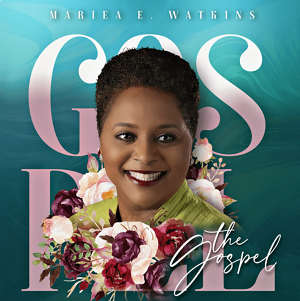 Approaching us with an alluring groove that only gets stronger as we press on, Mariea E. Watkins’ “The Great I Am,” featuring Seanie Ranz, features a lustiness that I rarely hear in gospel music, but truth be told, this is true of the majority of songs in Watkins’ debut album The Gospel. She’s going after the hook as hard as she can in this track, the slow and seductive “Redeemed,” and startlingly warm “Fly,” and while this has been a pretty good season for gospel music in general, I think what she delivers to us in this rookie LP is by far some of the best content you’re going to hear from an underground player before the start of summer.

“The Gospel Truth” drones forth with a heady instrumental foundation, but its closing vocal harmonies – supported by Robert Henderson, II – are some of the best on the entire album. The title track is a bit removed from the aesthetical leanings of the other material here, featuring a slow-rolling pop melody that feels a little grander than it needs to be, but it fittingly wraps together one of the heaviest vocals Watkins can deliver with an arrangement as brooding as it is weighty. Lyrically speaking, “Pray,” featuring Jacob Barnett, takes on an even greater presence because of the way the verses are structured in the performance. So much of this record’s charm is reliant on the tonal pleasures the singers, starting with Watkins, afford us, and I must say they’re applied much more liberally than I’m used to in an LP of this genre.

Mzansi Youth Choir stops in for a profoundly invitational opening song in “Clap Your Hands,” but the vitality of this groove-oriented work doesn’t eclipse the sweet melodicism of “Make Me Holy” for anything. With Chadwick Watkins helping out, our leading lady drops some of the most cutting lyrics of the entire record here and arguably sets up a title track for her sophomore album in terms of narrative. This song’s story feels like a fitting sequel to the overall theme of The Gospel, and although there’s a lot of solid material to be enjoyed throughout the entirety of the tracklist, this is a single-worthy piece undeniably encapsulating the soul of the LP as a whole.

In songs like “Blessed Be the Name of the Lord (ft. AngelTheStar)” and “Make Me Holy,” Mariea E. Watkins demonstrates a gift behind the microphone that is all too rare to come by in contemporary music of any genre, and the fact that she’s using it to make gospel feel so much more provocative and meaningful than it has for many listeners in a generation is downright heartwarming. The Gospel is a terrific introduction to her artistry, and hopefully a modern movement away from the plasticity that has infected some of this genre’s most promising young talent for too long now. Watkins gives us reason to believe in more ways than one here, and her efforts deserve plenty of accolades.

User Rating: Be the first one !
Share
Previous Project Grand Slam “I’m Falling off of the World” (SINGLE)
Next dark passenger “i see your mask” (SINGLE)