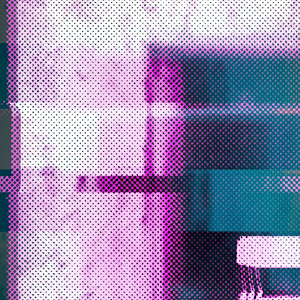 Electronic composer Lewis Mander’s work under the moniker dark passenger has earned him considerable attention from aficionados of the style. His preceding single “designed for rejection” introduced a sound that is, in turn, dissonant, abrasive, and unforgiving and dark passenger’s new single “i see your mask” continues developing along similar lines.

It isn’t content rehashing its predecessor, however. “i see your mask” is a clear step ahead of “designed for objection” in the variety of the musical arrangement and its unpredictable textural shifts while retaining the same essential spirit. His command of compositional dynamics is absolute here. “i see your mask” will have an almost inhuman quality for some at several points. It’s certainly in the listener’s face from the outset and offers little respite.

The song’s percussion has a clear industrial influence. Even listeners who prefer traditional vocal-driven fare will find a lot to latch onto here as Mander orchestrates the track in a way certain to keep listeners perched on the edge of their seat and the song’s clang and crash crescendos at the right time and place. It’s hard to distinguish traditional instruments through the song’s effects-laden web, but their presence is unlikely.

dark passenger has thoroughly immersed himself in this style. He isn’t producing throwaway numbers whose reach ends at the club doors or car windows; they are, instead, lasting illustrations of the genre’s value and substantive musical statements. “i see your mask” is urgent, without question, but the song’s lasting impact on listeners comes through a process of accumulation.

He builds the single in a way a painter might. He’s moving in the macro rather than the micro here but coheres the song’s arrangement with impressive off-handed skill. One passage of the song compliments the next and each transition between the song’s individual sections never leaves you jarred. dark passenger has labored long, obviously, to realize the song’s potential.

It definitely isn’t for everyone. Anyone searching for uplift, lilting melodies, or earthy soul are advised to look elsewhere. Lewis Mander has an obvious feel and passion for this sort of take no prisoners style of electronica, but it’s still a narrow swath of the music listening public who actively embrace music like this. If that sounds like a slight, it is not.

dark passenger is out on the ledge and not afraid of standing there. “i see your mask” may generate a pulverizing wallop, but there is a high-wire act quality you cannot ignore. Mander doesn’t care if he alienates listeners. They don’t see eye-to-eye anyway. He’s following his vision for the track, no matter what, and its inexorable and uncompromising verve is a significant source of its fuel.

Mander has obviously discovered a potent vehicle for musical self-expression that shares common reference points with similar artists but, in the end, goes its own way. His gifts for construction focus the song’s furies to white-hot precision without ever overwhelming listeners or minimizing its potential impact; once you start listening, it’s almost impossible to turn away.