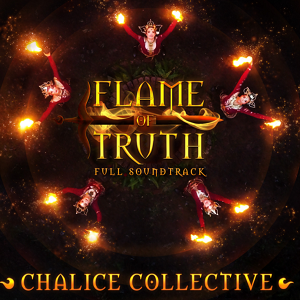 Don’t let a term like “radio edit” fool you when encountering Chalice Collective’s “Flame of Truth”. It doesn’t tacitly acknowledge the Collective’s latest single is a compromise, chopped indiscriminately for airplay, or lesser in some way. Chalice Collective wouldn’t dare. Sedona Swan Soulfire leads the Portland, Oregon-based group as its lead vocalist, creative director, and songwriter. Soulfire’s joined by two other outstanding vocalists, Chakaara Bliss and Ayla Realta, and their harmonies are an important part of Chalice Collective’s presentation.

They aim for far more than entertainment value alone. Soulfire and her collaborators believe in the transformative power of music in a way few others do. It isn’t simply a question of turning listener’s frowns upside down but, instead, fosters a listening experience capable of rejuvenating any listeners’ connection to music, life, and those they love. Music as a manifestation of self-realization. It may sound self-indulgent to those who believe a musician or songwriter’s mandate is to provide enjoyment for the audience and nothing more – Chalice Collective makes no apologies.

The track opens with an upfront vocal delivering the song’s opening lines followed by heavy and tribal-like percussion. Both are colored by light production gloss enhancing their immediacy. Few, if any, will get the feeling of the Collective straining for effect. The Eastern flavor of the music is impossible to ignore, but it would be a mistake to label it as such and walk away. Chalice Collective has a far broader presentation than that.

“Flame of Truth” has a theatrical component without obvious antecedents. Recordings can capture only so much of Chalice Collective’s creative intent; they find their fullest expression in live performance. Music alone cannot present the band’s video and media components, aerialists, and fire dancers performing with the singers and musicians. The music, however, is extraordinarily colorful, even vivid, practically exploding from the speakers with the song’s opening.

Chalice Collective doesn’t keep that energy wide-open throughout the song but orchestrates it instead with a measured point of view. There’s never any ill-advised attempt to build to one climactic moment, per se, but rather a handful of pinnacles along the way. It’s unusual in one respect if no other – it’s a practically pyrotechnic display of musical virtuosity that remains accessible, almost on a primal level, throughout.

The pairing of synthesizers and percussion provides the musical foundation. Chalice Collective seems to employ a virtual army of synthesizers as there’s an impressive electronic swirl engulfing much of the track. Artistic control keeps it from ever overwhelming listeners. The percussion, however, is the song’s inner core, the rhythmic invocation of the spirit, and powers some of the song’s most dramatic moments.

“Flame of Truth” is impassioned in a way few modern songs can match. It is, ultimately, wholly subjective if they reach their lofty goals, but there’s no question “Flame of Truth” is a singular effort. You won’t confuse the band with anyone else. They produce, without a doubt, an unique and affecting musical experience you’ll likely find yourself returning to multiple times.