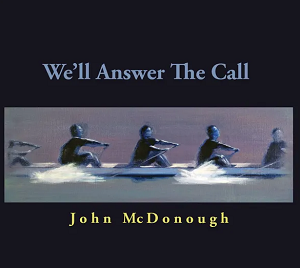 From the opening song “Shooting Star” to the final track, “Point Me East”, singer-songwriter John McDonough crafts a well-polished, interesting, grained body of work much the same way a carpenter works wood in the EP We’ll Answer The Call. Molding together the knobs and crannies of the medium, We’ll Answer The Call, has riveting moments of honesty and at its core, showcases McDonough’s from a bygone-era storytelling skills. Proving he can sew together stirring acoustic guitar melodies alongside triumphant choruses, McDonough is one to watch.

And I didn’t even tell you yet that it’s a concept album that follows the story of Joe Rantz and the Washington Huskies rowing program in the 1930s. The eight-man boat, the Husky Clipper, was used in the quest to achieve Olympic gold at the 1936 Berlin Olympic games. These songs all tie together and while it might seem a far cry for the modern listener to connect with Rantz’ story, McDonough proves that that sentiment couldn’t be further from the truth. He pulls the listener in and just like that you feel a part of something, like you’re in that journey. Inspiring and undeniably poetic, McDonough’s competitive passion for this subject is remarkably presented in the five tracks.

A bit of a crooner or more so a man of reflection and artistry that calls to mind nostalgia and grit, McDonough’s vocals in “Shooting Star” have a quick way of marinating. On first listen I wasn’t sure if the tenor of his voice was tender, or that it was just full of integrity. I think his honesty could be construed as something timid and that isn’t the case in “Shooting Star”. I loved the chorus in this track: never stop looking for your shooting star, oh-oh-oh-oh, never let others decide who you are.

He really plays upon the idea of self-discovery and self-acceptance in “Love You Just For You”. And this idea of exploring – again discovery – are both considered in the songs “Among The Stars” and “Point Me East”. McDonough excels at this because of the genuine layer in his voice. You really get that flavor, that desire in his voice to be free. These songs transported me to a wonderful place of calmness, and general reflection.

The title track is stunning. I really had no idea what I was getting into, and by the end of that first song I really settled into the majesty of it all. “We’ll Answer The Call”, which is the fourth song on the EP, really honors the Olympian legacy, and it evokes a beacon of hope. You are driven to this song by the previous tracks and it all becomes so clear. “We’ll Answer The Call” has a restlessness about it, but a centered-gliding force. I guess you could say it just feels ‘meant to be’. The full band sound on the album is welcomed and gives a bit of a boost to McDonough’s ‘every man sound’. Overall, We’ll Answer The Call is a definite win for John McDonough.