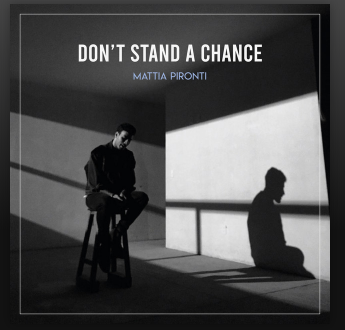 As essential as the lyrics that Mattia Pironti sings with such heartfelt emotion, the blistering beats that come firing at us from all directions at the midway point of the new single “Don’t Stand a Chance” are some of the more physically imposing of any you’ll hear in a Canadian pop song this fall. Spackled across the middle of the track, the drums that we find in this single are startlingly inspired and balanced with Pironti’s vocal as to elicit a reaction out of even the most preoccupied of listeners (the better half of whom will drop whatever they’re doing when its tuneful intro commences).

“Don’t Stand a Chance” doesn’t exactly feature a complicated arrangement – the exact opposite, really – but it doesn’t need to sport any super-sophisticated details to get a response from anyone who is within earshot of the harmonies it contains. Pironti unfurls dagger-like verses one by one in this song, meticulously stitching a patchwork of melodic wonderment together with the combined force of his tone and poetic wits, and even at his most relaxed he never sounds distant in the grander scheme of things here. In a nutshell, he’s showcasing his vocal talents without overstating his skillset.

I would love to hear an acoustic rendition of “Don’t Stand a Chance” sometime. The bones of the track are more than strong enough to support a stripped-down approach to the biggest melodies here, and I actually think that it would make it easier for us to enjoy the full scope of Pironti’s singing without any of the frilly distractions that are created in a juggernaut pop single like this one. He takes a really simple song and turns it into an anthem in “Don’t Stand a Chance,” and that’s not easy for any singer to do, no matter how long they’ve been in the game.

I hadn’t heard of his work before now, but I’m very excited to hear what Mattia Pironti’s debut album Mirror is going to sound like. He’s got an incredible amount of moxie in this single that is addictive and contagious (to put it mildly), and something tells me that he’s only getting started in showing us what he can do with it when everything is going his way. “Don’t Stand a Chance” is an ironically-titled song, mostly because its creator is currently looking at one of the brighter futures of anyone in or out of his scene.

User Rating: Be the first one !
Share
Previous Suzanne’s Band “One More Night of Christmas”
Next “She Wants What” by Lily Vakili Band