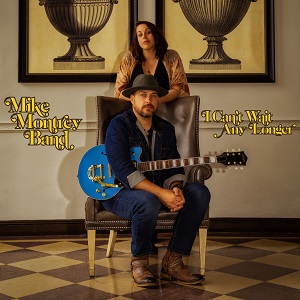 The level of detachment between pop singers and their material is honestly at an all-time high right now, at least from where I’m sitting as a professional music critic. Although pop isn’t completely devoid of connectivity between those who record and the messages they send, when we’re able to hear something with a little more investment in it, there’s no disputing the difference in quality. Mike Montrey Band’s new single “I Can’t Wait Any Longer” might be one of the special releases, and to those who love a meaningful soul number, it’s undisputedly a must-listen this month.

From the time we’re first introduced to the hypnotic sway in this single forward, there’s really no escaping the charismatic lunge of the band as Montrey croons at the helm of the song. He’s got a lot of space to do pretty much whatever he wants with these verses, but I admire his interest in keeping things relatively simple compared to what some of his peers probably would have done with this same composition. Self-control is so important in this genre, and although some forget this rather easily, we’re not finding any of that negligence in “I Can’t Wait Any Longer.”

Rather than being meditative with his lead vocal, as was probably a lot easier for the kind of song he’s singing here, Montrey doesn’t have any problems getting aggressive with his words when and where it counts in this track, which is telling of what he could potentially throw down in a concert where restrictions are even more barren. The chemistry with his band is already enough to give me chills when I’m listening to this, but just knowing that we’re only listening to what he can do at half-speed is all the more enchanting for anyone who loves raw emotion in their music.

Among the more obviously brilliant details on the cosmetic end of “I Can’t Wait Any Longer” is no doubt the amiable harmonies we find from one side of the song to the other, and I think they’re as much of an appeal to listeners as the story Montrey is telling here is. He’s able to express so much of himself without having to hash out a lot of poeticisms in his lyrics, and for all the players who try to do that in a single and fail, his example is among the finest I have listened to in a long time now.

There are no two ways about it – “I Can’t Wait Any Longer” is quite the mighty single from Mike Montrey Band, and if it’s showing us who these players can be when nothing is restricting their creativity, you can put me down for more of the magic they’re making in and outside of the recording studio. This is an underground market that is producing some real gems capable of putting a little concern into the mainstream bigshots who tend to run this industry, and the genres comprising it, and if you’re looking for something really unique this season, MMB’s new track is a can’t-miss release for sure.

User Rating: Be the first one !
Share
Previous The Empty Pockets “Outside Spectrum” (LP)
Next David Nigel Lloyd’s “Of Service in Rosemary Lane” (LP)