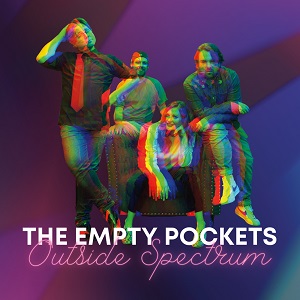 The Empty Pockets “Outside Spectrum” (LP)

As its raw, dirty sizzle comes into focus for anyone within earshot of the speakers, the title track in The Empty Pockets’ new album Outside Spectrum makes it clear just how much heat we’re in for in this latest record from the acclaimed Americana quartet. The music has a blue-hued harmony that gets a little stronger and a little more soulful as we press on, but the tempo has a rollicking rock n’ roll quality that seems to lack the swell of some of the other elements in the mix are enjoying – all deliberately, of course. Between this song, the stomping grooves of “Heart of Ash,” and the Project Grand Slam-esque “Privatize the Profits,” it’s undebatable that The Empty Pockets are masters of discipline, and perhaps one of the more fiercely creative groups in their scene at the moment.

There’s something that feels reductant at the start of “A Bird Does Not Sing,” but this goes away as the vocal takes over the spotlight in the song with immense melodic majesty. It’s got nothing on the layered harmonies of “No Matter What They Say,” but let’s face it – so few tracks do that it’s not much of a fair fight. “No Matter What They Say” sounds a lot more vulnerable than any of the other material in Outside Spectrum does, but it doesn’t sacrifice the sterling nature of its instrumentation for an exposed lyrical narrative. The Empty Pockets are proving that it is possible to have the best of both worlds with this kind of song, and their efforts are more than commendable from a critical perspective.

“Youth Vaping” has the filthiest little beat behind it, but with the grime of its signature melody, the rhythm is starkly clean in comparison. This is exactly the kind of fun country blues I would expect out of a live performance from The Empty Pockets, and in the exotic “Tense Car Tab Confrontation,” we’re given a hint at just how versatile a turn the band can deliver inside of two very different compositions. They never sound caught off guard by their own ambitiousness – a common theme in a lot of the new records I’ve been reviewing over the past year or so – but instead excited by the possibilities of “Hold Your Lamp Up,” the casual “Mrs. Sacramento,” and “That Gun” (of which, I might note, there are many).

“Maybe Next Time” takes us across the finish line in Outside Spectrum with a poetic epilogue that’s more playful than leering, and it’s here where The Empty Pockets make one more attempt to remind us that there isn’t much ground they are afraid of exploring if it means making a story that much more engaging for the listener. They’ve really hit this one out of the park with regards to the originality of the narrative as well as the structure of the music, and whether you’re new to their work or have been listening since their early days back in the mid-2000s, Outside Spectrum is every bit the adventure its title suggests it should be.