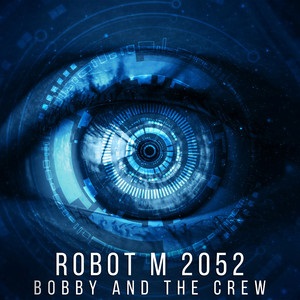 Like something stepping out of a time machine before our very ears, it doesn’t take long to recognize the sci-fi hue over the new single “Robot M 2052,” nor the creative influences Bobby and the Crew hold so personally in this performance. Although there’s something to be said for the cut-and-dry pop music that has been coming out of the minimalist and DIY movements over the past few years, I’m a little more excited about the elaborate indulgences of a track like this because of what it says for those responsible for creating it. Not only are Bobby and the Crew disinterested in following the leader, much as so many of their peers are, but they’re stepping into their own realm of melodic wit in this piece, giving chase to scores of critics and listeners along the way.

The hook in this track is, by far, the most conventional part of the song, and it’s made to unfold with much of the same tense foreplay that we find at the start of the intro just thirty seconds ahead of the main part of the composition. “Robot M 2052” alludes to some pretty dark undercurrents that aren’t being tapped into as liberally as they could have been by Bobby and the Crew, but a big part of what this song is, to me, is conceptualizing potential more than anything else. This was meant to give us an idea of what these guys are capable of as opposed to the whole nine yards, which makes me even more intrigued at what might be coming out of their camp next.

Depending on the mood you’re in when you first listen to this single, you could just as easily find elegiac elements in the music as you would something more cathartic and optimistic in spirit. One of the best qualities that “Robot M 2052” has going for it is a balanced lyrical component we’re not really expecting to find in the heart of all the instrumental chaos coming at us from seemingly every direction in this master mix, but it’s through our interpretations of this story – through the lens of the music, mind you – that we get a colorful display of emotions on the part of every player in this track.

I admittedly had no idea about Bobby and the Crew before I got into this all-new single and its accompanying music video just last month, but if we’re comparing their output to the rest of the unknown dispatches hitting the ground running out of the European underground, this is probably some of the more fascinating content I’ve had the chance to go over lately. There’s no denying that a lot of what “Robot M 2052” is will fall under the category of niche pop music, but for those who are able to see beyond its surface-level elements and expose the richly emotional underbelly that exists at the soul of this composition, it’s likely to be the first of many interesting releases we hear from this band.

The music of Bobby and The Crew has been heard all over the world in partnership with the radio plugging services offered by Musik and Film Radio Promotions Division.  Learn more https://musikandfilm.com