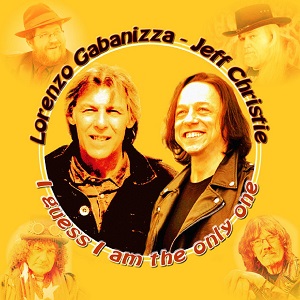 Rhythm is an essential component of any intriguing song in pop, but in the new single from Lorenzo Gabanizza and Jeff Christie, “I Guess I Am the Only One,” it’s as much an agent of evocation as it is a foundation from which these players can build an entire story. Rather than utilizing the depth of the lyricism in this single alone, Gabanizza and Christie are exploring the compositional space within “I Guess I Am the Only One” one beat at a time, creating a much more immersive listening experience than what the bulk of the mainstream content I’ve been reviewing in the past month has had to offer.

All in all, this might be geared more towards music aficionados than casual audiences, but it’s nonetheless quite an accessible listen.The harmonies that are framing the lyrics in “I Guess I Am the Only One” definitely don’t have the most imposing feel to them, but at the same time I don’t think they needed to in order for this to feel like a really formidable track from a melodic perspective. There’s a tornado of a groove just waiting to come alive in the chorus, but it’s not propelled by the percussion – it’s all the string play in this mix, which I would credit with the lion’s share of the chills factor in the song as a whole. The chemistry between these two becomes undeniable here, and I can only imagine it being all the stronger in a live performance.

“I Guess I Am the Only One” has good instrumental bones from which Gabanizza and Christie can construct a stunning concept with the lyrics, and although there could have been a little more love for the drums towards the conclusion of the song, I can understand the appeal in going with something more on the minimalist side of the spectrum with regards to the production standard. In a single like this one, there’s no need for indulgence on any front, and yet the inclusion of some excess on the vocal end seems to balance out a lot of the lyrical elements in a way nothing else could have.

These guys know how to assemble a piece efficiently, which is more than can be said for many of their closest rivals and contemporaries. Inviting and yet not overly intricate, “I Guess I Am the Only One” is a masterful collaboration from Lorenzo Gabanizza and Jeff Christie, and whether you are aware of who these two artists are at the moment or not, listening to this track will leave you wanting more of what they’re serving up in the recording studio.

Finding a creative rhythm with other players can be hard when you’re working at a higher caliber, but this is a pair that I have a good feeling about looking into the future. They’ve got the right elements in this piece to evoke the past as well as a very in-the-moment emotionality you can’t fake, and I’m eager to hear where it will take them next.