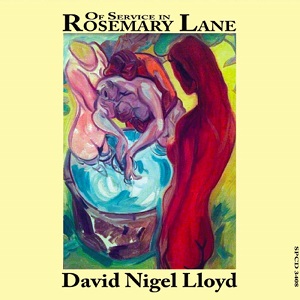 Poet and musician David Nigel Lloyd’s work has garnered a global audience without ever achieving mainstream prominence. It’s never been important. It’s the work, instead, that’s important. Lloyd’s obvious devotion to art and its possibilities are apparent throughout Of Service in Rosemary Lane’s ten tracks. It is never stated outright, but Lloyd reminds me in some way of the writer character E.I. Lonoff in Philip Roth’s short novel The Ghost Writer. He reflects on his work at one point saying, “I turn sentences around. That’s my life. I write a sentence and then I turn it around. Then I look at it and I turn it around again. Then I have lunch. Then I come back in and write another sentence. Then I have tea and turn the new sentence around. Then I read the two sentences over and turn them both around.”

This sort of dedication over and obsessiveness to detail doesn’t neuter Lloyd’s work, however. He builds the initial foundation for this collection around the concept of adopting famed guitarist Bert Jansch’s approach to his song “Rosemary Lane”. Such influences are a natural fit for acid folkie Lloyd, but no one will dare to call him that alone after finishing this release. His talents, reference points, and ambitions are far broader than any neat summation. The influence of Robin Williamson’s song-poetry exerts an intangible hold over the work as well. An important facet of this work is paying tribute to, in spirit, formative influences and it never comes at the cost of Lloyd’s voice.

“Sweet Nothingness Ask Not” will floor all but the deafest of listeners. Anyone hitherto unexposed to Lloyd’s songwriting and with an affinity for acoustic singer/songwriter material will likely find themselves riveted by this particular track. The careful and deliberate opening shifts into a lovely guitar-driven melody but the lyrics and Lloyd’s weathered baritone ache with life. “And Keep Our Foe at Bay” adopts a livelier pace than the opener. Tradition forms Lloyd’s bedrock without limiting him.

He works in timeless territory. “And Keep Our Foe at Bay” has an outstanding narrative that Lloyd inhabits with each line and the bloodshed, tears, grief, and several other emotions that the writing touches on rate high among the album’s high points. His exquisite guitar playing completes the track without ever detracting from even a syllable of the aforementioned narrative. His crisp production frames the guitar work with immediacy. It also accentuates his tendency to build crucial parts of his vocal melody straight from the guitar rather than exclusively relying on contrast and counterpoint. Keen-eared listeners will notice this, particularly during songs such as “The Rite of Fall”.

The album’s nominal title cut “Rosemary Lane” has some effects applied to its vocal that are certainly reminiscent of the acid folk style. Listeners will hear a slight affectation on his voice that is, fortunately, never a distraction; it enhances the song’s atmospherics without ever straining for effect. “Blues for a Blue Movie” pays homage to the form without ever sounding like a homage. Arrangements for a solo guitarist and singer may seem like cut and dry affairs with little possibility for imaginative thinking, but he turns such wisdom on its head. The arrangement of “Blues for a Blue Movie” is one of the album’s most interesting. It’s scarcely possible to encapsulate this album badly, let alone give it the review it deserves. David Nigel Lloyd has enjoyed a long and colorful musical career, but Of Service in Rosemary Lane may be his finest moment yet.