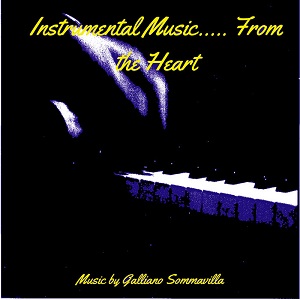 Melbourne, Australia’s Galliano Sommavilla’s love for creating music has helped sustain him throughout his life and enriches an already vibrant life with the ability for communicating with a mass audience. His new release Instrumental Music from the Heart is deeply connected with his Italian cultural roots as well as his wide array of musical influences.

He’s been pursuing his recording ambitions since 1995 when he debuted with the instrumental release Rain in My Bathtub. One of his most notable career achievements arrived with composing, arranging, and recording an original song each day from May 6th, 2013, to May 5th, 2014. The total of over twenty-seven hours of original music and 365 new compositions is one among many astonishing capstones for a staggering career.

He’s enjoyed a two-plus decade residency as a solo pianist at Melbourne’s Crown Casino and his 2020 release One Song served notice that COVID was unlikely to derail the pianist and composer. Instrumental Music from the Heart delivers on that promise with a set certain to elevate Sommavilla’s already lofty standing.

It opens with the glistening guitar and piano tandem of “A Kind Heart”. Sommavilla further embellishes the cut with some light electronic and post-production touches, but the focus of the song is the delicate interplay between the aforementioned instruments. Classical and soft jazz achieve an enjoyable confluence during the second track “A Peaceful Outcome” and it proves to be a natural segue from the album opener. Longtime music listeners will appreciate the song’s shifting tempos and the track’s overall construction.

“Follow Your Dreams” has a more deliberate tempo and a fuller synth and keyboard driven pedigree. It has a steady stuttering quality woven into the percussion and the pacing of the synth parts finds a perfect stride. Ambient sound has played an important role elsewhere during this album, but its best use comes with the track “Mystic Forest”. Sommavilla invokes nature with a deft hand here and, rather than feeling steamrolled by a heavy-handed approach, the composer enchants us by degrees.

Many listeners will love the slow and almost sensuous groove for the penultimate track “You Can”. There is a quasi-vocal presence recurring throughout Instrumental Music from the Heart, wordless and always yearning, that likewise reaches its peak during this performance. Instrumentals that conjure a genuine mood are far and few these days. Sommavilla, however, tosses them off with apparent ease, and this rates as among the album’s best.

“The Dreaming” concludes the album with the same imagination and restlessness defining the previous tracks. You cannot help but applaud Sommavilla’s penchant for creating space in his music without ever dragging the momentum into the dirt and the finale never tests your patience. It’s a perfectly plotted closer for a thoughtful and intelligent release. Galliano Sommavilla’s Instrumental Music from the Heart is one of 2022’s sparkling releases that you may otherwise overlook. Don’t. He’s found a level of musicality that’s well worth visiting again and again. Its personal value for the performer, as well, comes across through the music at every turn.