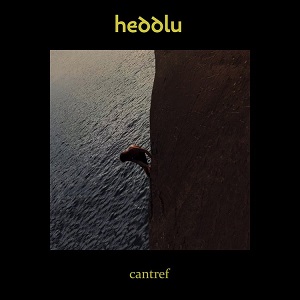 When an artist or band drops their debut, it’s the standard-setting release that essentially foreshadows what’s ahead in their career, and while there are a lot of boldly experimental elements to consider in the first official record from Heddlu, titled Cantref, there’s something very qualified about its creator’s drive, and, moreover, what he’s doing with it in these songs.

There are no compositional shortcuts in songs like “Locker,” “Benthic,” “Auto-Da-Fe,” and “Descensionist,” but instead a collection of complicated concepts that, when put together in the order of this tracklist, create a story that is told as much through the girth of the instrumentation as it is any of the words amidst the music.

It’s easy to weave together a narrative with poeticisms and hooks, but to take the raw materials that comprise “Daw Eto Haul” and “Cantref Gwaelod,” two of my favorite songs here, and develop something that is almost entirely emotional takes a lot more talent than what the status quo in popular music allows for, especially in 2022. Heddlu takes some big swings and comes up lucky here, but as a critic, I have to wonder how much of it had to do with luck over the strong talent we find everywhere from “The Not Knowing” to “(Ar)Nofio.”

Thanks to the clarity created by the production quality in this record, there’s rarely an instance in Cantref where we’re struggling to find the continuity between details in the music, particularly in immersive tunes like “Mouth Goes Dry” and “SMS.” The tonality of the instruments is enough to make any music nerd – or perhaps a competing act – drool, and I wouldn’t say that the overall inclusion of indulgent elements makes it harder for us to appreciate the depth of the composing at all.

If anything, the fact that electronic pop themes are coming together with alternative rock framework under a psychedelic lens makes the scheme Heddlu favors all the more desirable on both sides of the glass. Processed vocal parts scattered across the tracklist imply plasticity, but the contrast they lend to the big picture justifies what others would see as an element of inauthenticity tucked away in the mix. Everything done in Cantref is done with reasoning, and there’s no debating that after spending an afternoon with this LP.

Ambitiousness is far and away the centerpiece of Heddlu’s Cantref, and if you’ve been searching for something that fearlessly steps away from the mainstream only to refashion some of its most integral components as original, it’s a hard album to walk away from without having some pretty strong feelings about the artist himself. Heddlu is still a new project, but what it’s delivering in this record has got people talking for all the right reasons at the moment, and it’s hard for me to picture that changing as long as material as potent as what we’re getting out of Cantref is still coming into focus. It’s early to say for sure, but I think this is an act we should be getting quite used to.