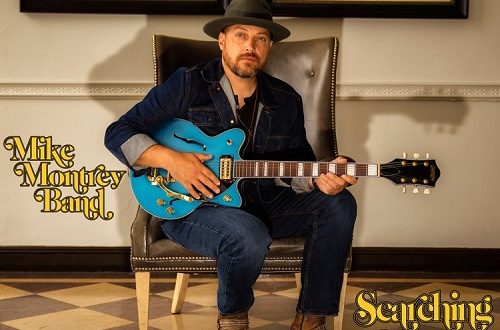 Mike Montrey has been moving up and down the Eastern seaboard over the last decade and change delivering his personalized brand of bluesy R&B soul far and wide. The New Jersey-based Mike Montrey Band’s latest collection entitled Searching for My Soul is a seven song excursion through Montrey’s songwriting world of longing, restlessness, and an unbroken spirit always looking to push on toward the new day. There’s a plethora of themes, lyrical and musical, rising and falling over the course of the seven songs and it leaves listeners wholly satisfied at its conclusion.

Such satisfaction is ironic from this release. Many of the songs on Searching for My Soul are “in the wind”, discontent, hungry, and yearning for some sort of transformational moment when the singer/speaker transcends their woes. “I Can’t Wait Any Longer” expresses one side of that for listeners with a sinewy and perfectly balanced performance, especially from the engine room of drummer Brian Prokop and bass player Anthony Duca.

His vocal partnership with Jen Augustine gives the Montrey band a dimension other units lack. Augustine isn’t your prototypical blues mama vocalist as she’s capable of moving from the rootsy Americana that’s the band’s bread and butter into outright pop singing with equally convincing results. She’s an important reason why the album’s second song, “Reno”, is among its best. This track, in some ways, reminds me of a lost Lowell George number and personalizes the album’s themes mentioned earlier in a way listeners won’t soon forget. It’s a haunting song, without question, but there’s more to it than that.

The careful and incremental fashion of the song’s build is a hallmark of the Montrey band’s patient approach to performance. Feel is king here – not running times, not cramming as much into these songs as they can handle, but rather presenting songs with a sound that reflects their lyrical identity as well. The same principle continues guiding tracks such as “So Long, City of Angels”, a much more outwardly energetic composition than its predecessors, but not by a wide margin. There is a bit of restraint running through some of the album, a sense of holding back a little, and some listeners might long for Montrey to let it rip with an unmitigated rocker.

“Blue Skies Again” is another of the album’s peak moments as the band really reaches quite frenzied, in the best possible way, heights in the song’s second half. It’s an impassioned number, arguably one of the album’s best. Montrey and Augustine, especially, scale new heights here that will thrill all but the hardest of hearts. The closer “Searching for the Sun” ends the release on an unexpected note for me. Pleasantly so. He opts for a predominantly acoustic closer practically overflowing with some of the album’s best lyrics and it ends the release on just the right mood for me. The Mike Montrey Band’s Searching for My Soul is an amusing title because he doesn’t have to look far or hard – evidence of his soul bursts from each of these seven songs.