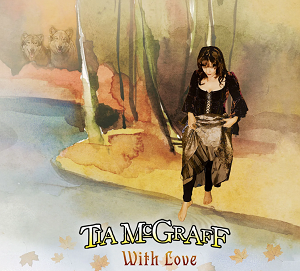 Children’s author, songwriter, and singer Tia McGraff, a native and longtime resident of the Ontario area has returned with a new seven-song collection entitled With Love. The new release hit during the first week of September commemorating the anniversary of her dog Jake’s passing to the day. McGraff’s songwriting is unabashedly personal. It’s never obscure, however, as McGraff’s writing taps into themes, hopes, and dreams that virtually every listener has experienced and continues living with – moreover, McGraff expresses those qualities in her life with conversational eloquence and acute musical instincts skilled enough to find endless variation in seemingly limited styles.

These variations are not pronounced. Casual listeners may not hear much difference between the pop/Americana/folk of the EP’s title song and the rock drums powering the first single “Go Your Own Way” but they feel them, they notice. With Love’s seven songs are essentially shaped from the same mold but McGraff, after over 15 years of releasing music, has refined her art to such a level that it recalls Monet and his water lilies. A shallow listen may hear uniformity. Deeper listens, however, will hear a songwriter of rare distinction excelling at her chosen craft.

She gives us something truly special, I believe, with the folk song style of “Clockwork” and the penultimate “Night Hawk”. The former is a prototypical singer/songwriter track with accompanying orchestration and a rootsy tilt, but it’s relatively conventional when compared to the language McGraff achieves during the latter song. Dazzling wordplay doesn’t detract anything, however, from the song’s musical identity; McGraff writes well-balanced songs for this collection rather than tone poems for placeholder arrangements.

“Sometimes Love’s Like That” brings listeners the album’s sole arch-traditional ballad. It’s a patiently developed number with much of the same instrumentation as before and personal, even elegant, lyrics that nevertheless turn on key phrases all listeners will recognize. It is eye and ear-opening to hear how supremely relaxed she is throughout a dramatic number such as this, McGraff never forces the issue, and it makes for a more convincing performance.

I suppose that the closer “Change A Comin’” qualifies as having a social consciousness song lyric. It’s relative, however. The change McGraff’s writing about doesn’t seem to be tethered to anything quantifiable; it is an internal change she’s writing about here, not external. It’s engaging, nevertheless, and closes the EP in a memorable way without ever boring us with a bloated final musical statement.

With Love packs every bit as much into its seven songs as any full-length release. Largely arbitrary distinctions begin rubbing me the wrong way with releases such as this because it’s an EP in name only, as far as I am concerned, as the songwriting, especially lyrically, carries the breadth and impact of supposedly “longer” full-length albums. Tia McGraff should be proud of this one, just like any other. She’s worked hard to craft a winner for us but there’s no sign of strain in the final result. With Love sounds as if it poured out of her, full bloom, and we’re better having heard its charms.