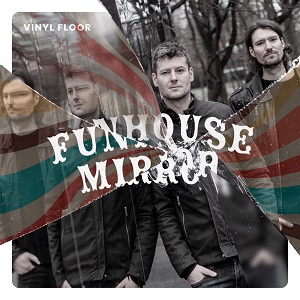 2 weeks ago CATCH OF THE MONTH, MUSIC REVIEWS, PICK OF THE WEEK

Denmark’s Vinyl Floor is the personal project of brothers and songwriters Daniel and Thomas Charlie Pedersen. Their fifth full-length studio album Funhouse Mirror revisits the symphonic pop ambitions of earlier releases such as 2012’s Peninsula and Vaudeville (2014) while retaining the same individualistic songwriting bent. Working with producer Emil Isaksson and a small cast of musical contributors has placed the Pedersens on the same creative page with likewise gifted artists producing impressive results. Each of the ten tracks included on Funhouse Mirror has something distinct to offer listeners rather than retreading familiar ground.

The three additional musicians joining the band for Funhouse Mirror reflect their musical needs rather than appearing as gimmicks. Swedish multi-instrumentalist Bebe Risenfors plays a selection of horns, percussion, and organ throughout the collection. Former Bob Dylan bassist and bandleader Rob Stoner lays down bass for three songs on the collection while Danish violinist Christian Ellegaard, a member of the national Danish Symphony Orchestra, contributed strings for 2 of Funhouse Mirror’s 10 songs.

“Anything You Want” begins the collection with airy and wide-open alternative guitar rock. It isn’t the sort of riff-tacular treatment you might associate with Seattle’s hard rock bluster, however, but rather melodic and meditative. The latter quality is highlighted in the song’s unexpected second act when the Pedersens break the song’s structure down and slow it for a dynamically varied finale.

Even those who may otherwise be naysayers on the album as a whole will struggle to find fault with “Clock With No Hands”. The album’s second track is an outstanding character study without ever belaboring the point and the finely crafted lyrics serve the music as well as vice versa. They can carry the alternative rock label because they clearly delight in subverting traditional musical structures, but they are far more well-rounded than that.

Piano, drums, and ample spot-on vocal harmonies are the spotlight-worthy moments driving “Between Lines Undone”. The overall song, however, is an exemplary masterclass in songwriting fusing elements of different styles into a coherent whole without any seams showing. The harmonies, especially, are lush without ever slipping into saccharine overkill. “Dear Apollon” achieves a dream-like swing that lulls listeners into its world and sustains their interest throughout the track. Exquisite piano playing once again provides their songwriting with a key flash point illuminating the rest of the track and, once again, the Pedersens’ talent for crafting direct and memorable melodies is in full effect.

The stately and steady sweep of the title song belies the layers present in the recording. It’s arguably the album’s most fully-realized moment but may fly under the listener’s radar because of its deceptively simple surface. Listen deeper. It’s a masterful bit of pseudo-orchestration, never biting off more than they chew, yet still reaching far higher and more substantive levels than many of their contemporaries. “Stare, Scare” pairs crushing guitar work with nimble yet dazzling synthesizer textures. Vinyl Floor avoids the typical sterile techno sound that comes with a poor grasp of the synthesizer’s potential. They utilize its contributions in such a way that the playing inflames an already fiery cut.

User Rating: Be the first one !
Share
Previous The Harmony Dreamers Project “I Come from Earth” (LP)
Next Tia McGraff “With Love” (LP)