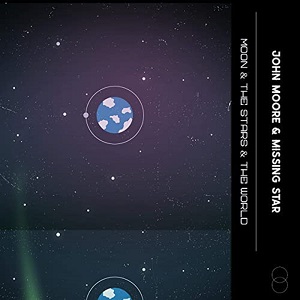 “Moon & The Stars & The World”  – John Moore And Missing Star

Moon & The Stars & The World is the new album from John Moore And Missing Star. Featuring a rousing mix of nocturnal delights, thought-provoking lyrics, it’s a wild sonic journey that goes beyond any run-of-the-mill sound. These guys bring back the album orientated rock without sacrificing a modern sound. From the opening rocker “Burn It All Down” to the retro-pop “Was It Worth It All”, John Moore And Missing Star showcase great depth and dynamic tones.

Never drifting far from their rock/bluesy tones, this band has vibrant, ear-catching hooks. Their pallet is often empowered by a melodic guitar and lead singer/guitarist John Moore’s smooth vocals. He has a voice that is made for pop music in the same way Tom Petty had just a slight rugged sheen to his delivery. While listening to a singer like Moore, it’s apparent he brings the same energy into the studio as he does to the live setting. I found the synergy with the band, their tightness, incredible. In “See Me Again” the lead guitar might garner most of the spotlight, but the subtleness of the bass throbbing along, the drums beating like a wounded heart and the hush of the piano keys made for a much more dramatic experience. I wanted to take up shop in that undercurrent. When the guitar starts to squelch, like a sparkling eureka moment, it’s like meeting up with a friend or love after a long time has passed. That buzzing of excitement, that twinkling of nerves all bundled up and ready to explode.

The middle tracks, including “Himerima (The Moon, Stars & The World)”, “Drag You Down” and “Don’t Feel A Thing” feel intricate and exciting. “Himerima”, is the longest on the album and is just over 5.5 minutes long. It’s reminiscent of Pink Floyd. “Drag You Down” is beguiling just the same. Nothing is real here, only make believe, is one of my favorite lines from the track. These songs are consistently gripping. When the band isn’t catching your attention with the moving guitars, they are spoiling you with the rhythm section and organ (or piano) keys.

The final crop of songs, “Over Now”, “Those Lies”, “Fading Away” and “Was It Worth It All” surround the listener with fresh takes on life, relationships, loss and perhaps self-worth. I think these songs are about more than what the lyrics suggest and like all great songs, they mean something different to each listener. Where I went as a listener was in a small venue scene, imagining this band playing a late-night set – like the headliner at a local club always does. They might be playing their 15th night strait and maybe the concert isn’t sold out, but they are playing like they are headlining Madison Square Garden.

This band brings an arsenal of talent to each song, a far-reaching soundscape. They make you feel like you’re a part of an experience listening to each track they bring you. Besides Moore, this band is bassist Tom Robinson, guitarist Steve Ryder, keyboardist Joe (Mojo) Mergler and drummer Shannon Street.

User Rating: Be the first one !
Share
Previous Heartour – “Little Waves” (SINGLE)
Next “Come And Getcha Some” by Charlie Kulis Band