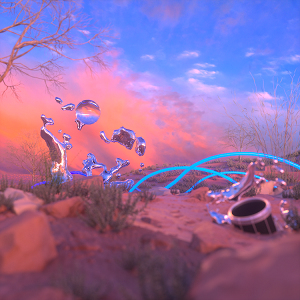 If there’s one man who still knows how to keep things interesting with his work after nearly two decades in the music industry, it’s Jason Young, and his new music with Heartour is all the evidence I need to verify this. In the single “Little Waves” from the EP Divert the Asteroid, Young doesn’t rely on the same techniques that launched his first, second, or even third albums to get us excited about the sweeping melodic strength here; he immediately steps outside of his comfort zone compositionally and executes something familiar yet entirely different from anything he’s done before.

Everything here starts and ends with the synth play forming the basis for the harmonies in “Little Waves,” and I think it’s necessary to understand that without their presence, this would be a completely different song in every department. There’s so much color coming out of the tonality the synthesizer offers to the pillars of what makes this single such an alluringly melodic piece to begin with, and even if they had been replaced with something straightforward like an acoustic guitar or a piano, that would be too much for the fragility of the lyrical content here to withstand. Details account for the charm of this release, and you don’t have to be a world-class music nerd to know that.

The rhythm of the music in “Little Waves” isn’t defined by the percussive element in the mix alone, but instead by the manner in which all of the instruments are made to interact together. This kind of amplified collective force can prove problematic in cluttered numbers, but in the case of something as carefully crafted as this song is, it only serves to make Young’s singing, verses, and instrumental backdrop more unforgettable in this setting (as if he needed the help in the first place, right?).

This arrangement is deceptively complicated and beefed up to sound a lot more fanciful than it really is, but if you’re listening closely enough, you’ll be able to pick up on the minor simplicities in the tempo and tone of the play here that make “Little Waves” a remarkably black and white track to analyze. There’s never been a legend who thought over-stylizing a proven formula was a good idea, and in this area Jason Young is doing a fine job of keeping with the tradition of the icons in pop to have come before his campaign.

Young and the Heartour name weren’t on my radar up until the release of R U In in 2020, which quickly became one of my favorite LPs in a year of music undeniably ripped apart by the pandemic, but seeing as “Little Waves” and its parent record in Divert the Asteroid are continuing to evolve from the themes of that album, I’m planning on sticking with the act for the foreseeable future just to hear what comes next. “Little Waves” doesn’t play by the rules, and yet it’s somehow one of the more conventionally attractive pop songs I’ve heard since the last time I had picked up a Heartour disc for review.