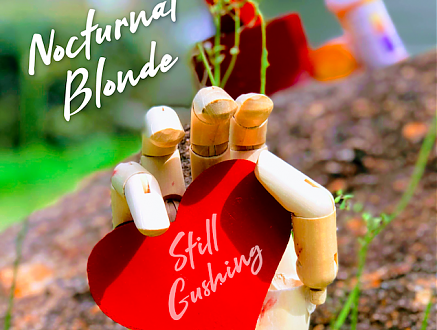 With the cadence of an elevated heartbeat, Nocturnal Blonde kick off their new album Still Gushing with an evocative drumbeat and a burning vocal harmony between Rachel Adams and Richie Williams in the first of the twelve tracks that Williams wrote with his brother Dave, “Smart Heart.” “Smart Heart” shoulders a beast of burden in its lyrical admissions that will be revisited in the aching, slow-building “Blown Away,” and later on in the wallop of overdrive we hear in “Ricochet,” and even if your knowledge of the opioid pandemic is limited to the occasional news blip on the local TV station, it’s next to impossible to walk away from these songs and the nine that join them in the watershed LP that isStill Gushing without feeling like we’ve walked a mile in the shoes of someone tormented by the evils of addiction.

“Drained” creeps out of the dust storm left behind by “Ricochet” and fills the void of silence with a majestic harmony that will get a shot of adrenaline in the treacherous groove of “This House” only three minutes later. Michael Stipe helped Richie Williams with the realization of this project, and I’d be lying if I didn’t hear traces of his trademark sound in the ethereally psychedelic “All Those Angels” and its tracklist neighbor “Wings and Horns,” both of which stood out to me as among the stronger songs on this album right from the get-go. Still Gushing has a very classic feel to its highpoints, but never – and I mean never – does it water-down a familiar formula in hopes of capitalizing on a deeply sensitive topic.

“Scripted,” the record’s leadoff single, has a beefy post-punk finish and makes for a great segue into the continuation of “All Those Angels,” “Almost an Angel,” my favorite song on Still Gushing. In this track, as well as “Flesh,” Adams asserts herself as one of the most powerfully talented, fresh-faced singers in the Athens scene at the moment, and that’s no small statement to make if you know the city’s fabled music beat. Although it clocks in at a minimal seventy-eight seconds, “Oh, D” is similarly cratering in its emotiveness, and it features Richie Williams taking over the lead vocal role in what I believe amounts to his greatest contribution to the LP.

Still Gushing reaches the finish line with its title track, which we got a peek at on the 2018 extended play Smart Heart but find in a much more appropriate setting on this album. With a yearning string melody that drifts into the silence modestly, the record comes to a stop, and we’re left to contemplate everything that Nocturnal Blonde has just told us in a melodic, but nonetheless acerbic tone. It’s easy to take away something different with every listen that we afford this beautifully elegiac LP, but no matter how many times I hear Still Gushing, I don’t know that I will ever completely tire of examining its lyrical concept and the heroic harmonies that surround it. It’s as close to a masterpiece as I’ve analyzed this August, and superior to anything that you’ll find on the American Top 40 at the moment.

User Rating: Be the first one !
Share
Previous Allocai is reaching out to a lonesome world in this single
Next Smomid’s Pyramidi Scheme (LP)