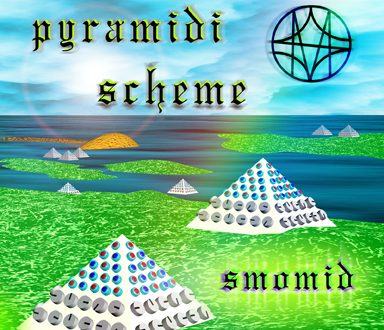 Nick Demopoulos, working under the moniker Smomid, produces musical compositions defying tradition and pushing listener’s ideas about songcraft into challenging new areas. It is key for readers and potential listeners to recognize what awaits them before hearing this release for a first time. He writes and records music with self-designed instruments capable of performing interactive computer music. The glitch style Smomid adopts for Pyramidi Scheme draws from a deep toolbox of sounds, unexpected vocal contributions, deceptively slapdash tempos, space, and even improvisation. This ten song album release is an impressive statement of ambition in an era where many new acts are content copping or elaborating on long standing forms.

It isn’t an album bereft of conventional aspects despite Demopoulos’ unorthodox approach. Melody emerges in unexpected ways. An assortment of computerized notes, some shrill while others occupy lower registers, augments recurring electronic melodies bubbling to the surface during the opener “Message to the Moai”. The overall mood of the recording is melancholy and deliberate and threatens to descend into freeform chaos without ever doing so. Smomid darkens the mood further with the second track “Submerged”. This composition isn’t as airy as the opener and the added density contributes a lot to its comparative intensity. You will find little in the way of melody here – the track is, instead, an artful assemblage of electronic manipulations threaded together with surprising coherence.

The ambient side of the project comes to the fore with the track “Pyramid of the Sun”. Customary attributes like melody are, once again, missing from the composition and we instead visit an electronic nether land defined by a curious contrast of no obvious human warmth and, yet, an understated emotional tone thanks to Demopoulos’ orchestrations and how he threads the various computerized strands into a seamless whole. It may not be obvious on a first listen, but there is a method to Smomid’s madness.

“The Watchers” has an ominous air and melody returns again. It is an uncomfortable and slightly phantasmagoric listen; it reminds me, in some ways, of progressive rock legends King Crimson at their darkest. Smomid accelerates the tempo during the middle of the song and the manic percussion leaves scattered beats strewn throughout the performance. This middle portion of the song reaches an intense peak before segueing back into its slower origins. The finale “Age of Leo” has a lighter touch than anything else included on Pyramidi Scheme and the slight lilt of the electronic instrumentation imparts an optimistic sound to the performance that helps it stand out even more.

This instrumental release isn’t everyone’s cup of tea. Lacking conventional instrumentation in any meaningful way will be a turn off to many, but the thoroughly modern texture incorporates traditional elements of songcraft along the way and helps ground the release in a recognizable music landscape. Its more daring moments demand multiple listens to fully appreciate – Demopoulos is a subtle composer and has mastered his DIY approach to songwriting. Smomid’s Pyramidi Scheme is challenging, without question, but rewarding in ways more mainstream efforts cannot approach.