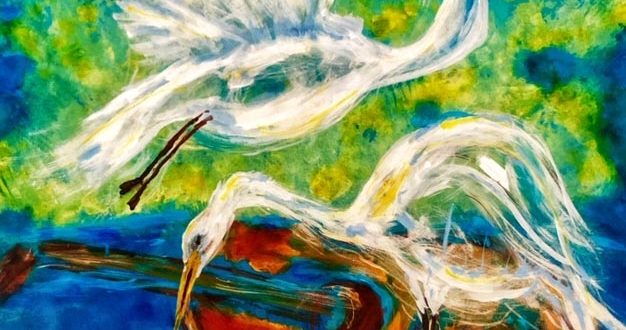 Pulsating acoustic guitars. Thought-provoking lyrics. Decadent strands of melodicism stained in bitter poeticisms of old Americana. “The Ballad of the Unknown River Driver,” “Broken Cup,” “Best Mistake,” “Patterns,” “Labor Day” and really every track on Leo Harmonay’s brilliant new album Naked Rivers is layered in a different shade of sonic smoke, together forming a beautiful patchwork of folk, alternative rock and surreal country music. While many of his statements here are quite confessional, I think that this LP is just as much an introspective piece for this artist as it is a selected commentary. In songs like “Labor Day,” “Contours,” “Lost Summer” (which features Enlia on guest vocals) and the title track, Harmonay abandons some of the more constrictive songwriting themes that he had employed heavily in previous records like The Blink of an Eye in favor of adopting more relaxed, freeform expressive structures that use texture as much as they do tonality in telling us a story. Naked Rivers is the most complete record we’ve heard from this singer/songwriter, and it’s one of my personal favorites to debut this summer.

I love the textural contrasts that are littered throughout “Patterns” and “You and the Sun,” and I think that by putting more of an emphasis on his rough edges in this LP, Harmonay was able to create a tracklist that doesn’t sound artificial or lacking in natural, uncorrupted substance. The multifaceted arrangements heard in “Broken Cup,” “Lost Summer” and “Contours” are definitely complex, but there’s nothing here that I would consider inaccessible to occasional listeners, music enthusiasts and everyone in between.

I don’t think that Leo Harmonay was trying to appeal to any one specific audience over another in this album; if anything, he’s displaying a lot of fluidity that was missing from his past recordings and making it pretty difficult for anyone – critics or otherwise – to describe Naked Rivers as anything other than an experimental treasure chest of polished tones, tempered melodies and scorching vocal harmonies that can stand up to some of the very best of the year thus far. This isn’t necessarily the most elaborate folk LP of 2019, but it’s certainly one of the more involved.

Fans of folk, pop, mild rock and left-field country music alike would be quite wise to pick up their own copy of Naked Rivers this August if only to experience the fresh sound of Leo Harmonay, who is operating at an artistic capacity that I hadn’t thought him capable of reaching before this moment in time. He’s cutting out all of the unneeded filtration in these songs, moving out of the way of his own material, and using everything at his disposal to make a simple lyrical narrative feel like a full-color piece of cinema. There are a lot of really talented artists across the country creating some similarly stylish acoustic music right now, but of everyone that I’ve been following as of late, this is definitely one of the more motivated and well-rounded performers that I’ve had the pleasure of reviewing in the past few months. I’ll be staying tuned, and I would tell you to do the same.