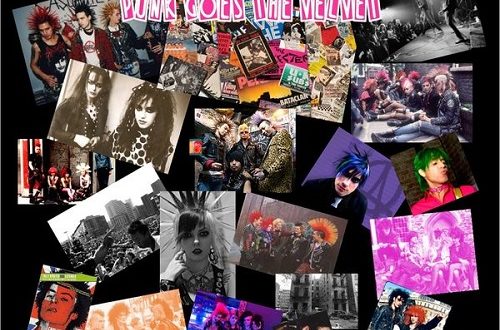 “Punk Goes The Velvet” (EP) by Jupiter In Velvet

Punk Goes The Velvet is the new five-track EP from London’s Jupiter In Velvet. Featuring a bevy of songs ready for rotation, the psychedelic and punk laden tracks are sweltering in power vocals and driving guitar riffs. Not to mention the swarming drums, Punk Goes The Velvet is one nod to the 1970s Ziggy Stardust era and one giant leap into the modern realm.

Jupiter In Velvet, whose real name remains a mystery, describes his sound as electro dance rock, but in hearing the first track, “And So The Earth Stood Still” not only is dancing the first thing on your mind, so is the raucous backbeat and rhythms. Setting the stage for a vibrant listening experience, the vocals are from a man that sounds like a mix between David Bowie and Pelle Almquist (The Hives). “And So The Earth Stood Still” reverberates…giving the listener a keen inclination that his voice has more melody than anticipated.

In “Not Again” the thundering drums surround the listener like a mosh pit. Oh, no, oh no not again! the chorus clings to the blinding guitar riffs. This song begs to be listened to in a sticky rock club. It’s anthemic rise and the changing timbre in Jupiter’s voice is like ingesting caffeine. Just a trip! The guitar rips like a Tasmanian devil.

The bass heavy “Please Don’t Ever Let Me Go” also has a killer vocals. So used and abused, Jupiter includes an undercurrent of melodic rumbles. Running rampant through the track is a Jimi Hendrix-level riff. This is the track that will have you humming the melody and playing air guitar at the same time.

“Dimestore Suave” continues the amp’d guitar and the furiously fast drums. I hear a hint of the 80s New Wave in the music bedrock, a mixture of Depeche Mode and The Psychedelic Furs. It’s a looser tone than “Please Don’t Ever Let Me Go” and wiggles the bones more succinctly. He hails, as if he were the village crier with the best news on earth to share, broken hearts strewn all across the streets, confusion tops the charts with its addictive beat, oh Lord not sure if I can take anymore. I was enamored with the guitar and the pounding beat. Left pulsing and engaged, “Dimestore Suave” had me spinning in delight.

In “Get Out” Jupiter exclaims get out of your house, shout it out, as the screeching guitar hits bitchin’ levels. The guitar work in this track is oh-so-good. As the last of the five, you have a great sense of Jupiter as a guitarist and the mesmerizing scales in each track expand each song. With each track he gets better and better, choosing different harmonies and head-turning chords. This is so reminiscent of Hendrix and Bowie’s work, but Jupiter adds a layer that makes it sound in-the-now. It’s a daunting task to take on your heroes and try to emulate them without mimicking them. Punk Goes The Velvet is a perfect example of an artist adding his unique stamp to a beloved sound. It’s a machine of punk, rock and New Wave churning over and over, with each song unearthing a new layer of artistry.

User Rating: Be the first one !
Share
Previous “Origins – Singers and Songs That Made Me” (LP) by Jeff Coffey
Next NOCTURNAL ANIMALS